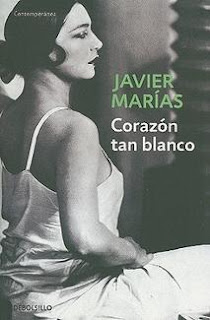 I have a couple of things I'd like to say about this book--in particular a rather tricky one on translation which I now think I better save for another post since I'll need some assistance with it anyway--so I hope you'll forgive me if I take the easy way out and start with a quote from the very beginning of the novel:  "No he querido saber, pero he sabido que una de las niñas, cuando ya no era niña y no hacía mucho que había regresado de su viaje de bodas, entró en el cuarto de baño, se puso frente al espejo, se abrío la blusa, se quitó al sostén y se buscó el corazón con la punta de la pistola de su propio padre, que estaba en el comedor con parte de la familia y tres invitados" ["I did not want to know but I have since come to know that one of the girls, when she wasn't a girl anymore and hadn't long been back from her honeymoon, went into the bathroom, stood in front of the mirror, unbuttoned her blouse, took off her bra and aimed her own father's gun at her heart, her father at the time was in the dining room with other members of the family and three guests"] (19 in the Spanish edition, 3 in Margaret Jull Costa's 2000 New Directions translation of A Heart So White).  "The girls," it turns out, refers to the suicide victim, who would have been the narrator's aunt had he been born yet, and the narrator's eventual mother, who married her sister's widower some time after the tragedy took place--a very messy state of affairs to say the least.   But as anyone who has read one of Marías' novels dating back to the 1989 Todas las almas [All Souls] might guess, the narrator Juan, himself just back from a honeymoon in which he was beginning to suffer from an unspecified "malestar" ["feeling of unease"] and "los presentimientos de desastre" ["unspoken presentiments of disaster"] (29 in the original, 12-13 in Jull Costa) that will later become clear are related to concerns about possible infidelity, will spend much of the rest of the novel looking back on and amplifying this comment about the secret in his father's past involving three women--two of whom perished under mysterious circumstances.  I don't want to say much more about the surface what that Corazón tan blanco is about, about how people in the narrator's life practically force him to learn about the dirty laundry in his family's past, but it's a juicy tale, told with the usual Marías verve and complexity, if maybe just the teeny tiniest letdown in its resemblance to a mini Tu rostro mañana [Your Face Tomorrow] in terms of its thematic preoccupations with telling and not telling the truth, the Shakespearean allusions to guilt and culpability and complicity, and things of that nature (of course, people who'd rather read a 300-page novel than a 1,300-page novel might not share my concerns).  However,  it's also livened up considerably by multiple truly amusing setpieces like the one where Juan tells how he met his future wife Luisa while they were serving as interpreters for two bigdeal politicians who appear to be prime ministers Felipe González and Margaret Thatcher.  Annoyed by González's incessant jangling of his keys, Juan breaches translation etiquette by pretending to have the British leader ask: "--Perdone, ¿le importaría guardar esas llaves?  Todos los ruidos me afectan mucho últimamente, se lo agradezco" ["Would you mind very much putting away those keys?  I'm terribly sensitive to noise lately.  I'd be so grateful"] (81 in the original, 63 in Jull Costa).  Then putting words in the mouth of the Spanish leader, Juan pushes his luck with a fake question to the Iron Lady herself:  "--Si puedo preguntárselo y no es demasiado atrevimiento, usted, en su vida amorosa, ¿ha obligado a alguien a quererla?" ["If you don't mind my asking and you don't think I'm being too personal, have you, in your own experience of love, ever obliged anyone to love you?" (82 in the original, 63 in Jull Costa).  Impertinent questions, with deliciously unexpected answers, all put in the service of a novel obsessed with "creative" translations and lies and concerned with the sense in which an untruth might be more revealing and less deceitful than the truth itself.  (Debolsillo) 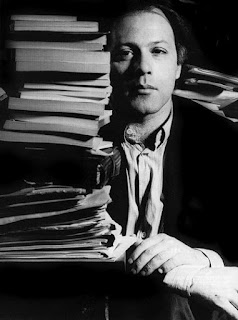 'My hands are of your colour; but I shame to wear a heart so white.'
SHAKESPEARE.