The Condor Years: How Pinochet and His Allies Brought Terrorism to Three Continents 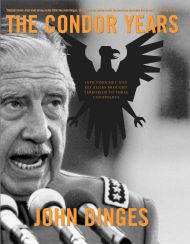 The Condor Years: How Pinochet and His Allies Brought Terrorism to Three Continents (The New Press, 2004)
by John Dinges
USA, 2004


[The assassination of Orlando Letelier, the well-connected Pinochet opponent who was a foreign minister, defense minister, and Chilean ambassador to the U.S. under the Allende administration, in Washington, D.C. in 1976] is one of the Condor stories that is the object of this investigation.  The missed opportunity to prevent an act of terror and murder on the streets of Washington pales beside the deeper tragedy in Latin America and of the deeper failure of the United States in that period.  The historical question is this: How many of the thousands of murders committed by Chile, Argentina, Uruguay, Bolivia, Paraguay, and Brazil could have been prevented if the United States had taken "a strong forward public posture, [or] even a private posture" against the killing, torture, and disappearances its allies in friendly intelligence agencies were carrying out?
(John Dinges, writing about "The First War on Terrorism" in The Condor Years, 9)

John Dinges' The Condor Years: How Pinochet and His Allies Brought Terrorism to Three Continents (available in Spanish as Operación Cóndor.  Una década de terrorismo internacional en el Cono Sur) is a splendid, tenacious piece of research that brings dozens of interviews and hundreds of pages of courtroom testimony and declassified documents to bear in its telling of the once secret history behind Operation Condor: the Pinochet-led "war on terror" that saw Chile, Argentina, Paraguay, Uruguay, and other 1970s South American military dicatorships teaming up to share intelligence on real and imagined "subversives," to crush domestic dissent through kidnappings, torture, and other extralegal measures such as "disappearances," and to eventually extend assassinations of non-violent political opponents outside national borders in both Europe and the U.S.  It's a gripping but disturbing read.  While Dinges never really minces any words about the known thugs or morally reprehensible actions under consideration (on the Chilean Condor founder Manuel Contreras: "This well-regarded officer was the architect of a unique intelligence system that was about to embark on an orgy of mass murder" [66]), one of the things that lends confidence and credibility to his assertions is the combination of careful fact-checking and considered analysis on display when discussing loaded policy questions such as how much the U.S. might have helped set the table for the Pinochet coup or why some in the highest levels of the U.S. government might have looked the other way during Condor human rights violations.  Another thing that Dinges, a foreign correspondent in Chile during many of the Condor years and now a professor at Columbia University's Graduate School of Journalism, succeeds at is the deceptively simple act of giving a voice to some of the innocents caught in the crossfire--at the very least, reading about Martín Almada, a Paraguayan who would later become "an accidental human rights hero" for leading post-dictatorship authorities to Paraguay's state "Archive of Terror," but at the expense of the loss of his wife, who suffered a heart attack while being forced to listen to Almada being tortured for a crime against the state he didn't commit (237-241), is an experience that I'm unlikely to forget anytime soon.  (The New Press)