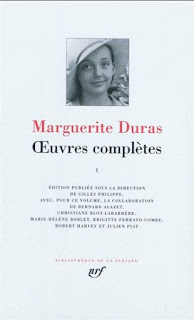 I finished Haruki Murakami's laughably inept Kafka on the Shore something like a day or two after I finished Marguerite Duras' assured, devastating Moderato cantabile.  Bad timing for Murakami because there's nothing at all funny or inauthentic about Duras' book.  In a quiet seaside town, a restless child's weekly Friday piano lesson is interrupted first by the roar of a passing motorboat--a symbol of freedom and the chance to escape--and then by the piercing wail of a woman who has just been killed in a crime of passion in a neighboring café.  The child's mother, Anne Desbaresdes, will spend the remainder of the novella trying to piece together what happened and why on that fateful day in question; you, in turn, will read on with increasing Madame Bovary-like horror as the desperate provincial mother here seems to try to effect a similar escape by finding solace in drink, a flirtation with adultery with an "homme de la rue" named Chauvin, and finally an open identification with the murder victim herself.  What price freedom, eh?  As with the novelist's later Hiroshima mon amour, I was both drawn to and perturbed by Duras' austere, economic prose and by her uncanny sense of control while charting such emotionally troubled waters.  One of the ways Duras mounts tension in the text is by casually drawing attention to the fact that others are keenly aware of the reckless amount of time that Madame Desbaresdes, the wealthy wife of a big deal import-export magnate in town, and Chauvin, an unemployed factory worker, are spending together drinking wine in the bar.  However, the way she does it is almost cinematically subtle because she never lingers for too long on the shot: "Les premiers hommes entrèrent au café, s'étonnèrent, interrogèrent la patronne du regard.  Celle-ci, d'un léger mouvement d'épaules, signifia qu'elle-même n'y comprenait pas grand chose" ["The first men came into the café, were astonished, and questioned the proprietor with a look.  She, with a slight shrug of her shoulders, indicated that she herself didn't know much about it"] (1224).  Although this kind of unobtrusive moment might not even merit a second glance on its own, it turns out to be just the right amount of detail to set up a chilling scene later on.  As the narrative relentlessly chugs forward to its conclusion, the narrator laconically tells us that "un homme rôde, boulevard de la Mer.  Une femme le sait" ["a man is on the prowl on the Boulevard de la Mer; a woman knows it"] (1246).  While I won't spoil what takes place afterward or cite the brutal final exchange between the couple that practically made me sick to my stomach, suffice it to say that the prowler is Chauvin, the femme is a drunken Madame Desbaresdes who is hosting a dinner party attended by her husband's monied friends, and the thrust of what follows is a queasy dance with death that will help you determine whether Anne Desbaresdes is a martyr to a loveless marriage or just another victim in quest of annihilation.  A total downer--but an impossibly well-written one. 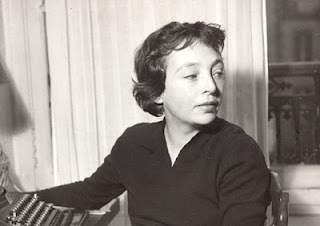