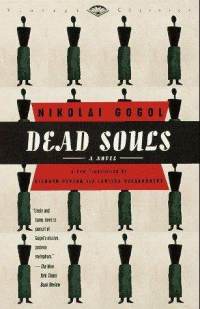 Having been at least twenty-five years since I last drove my "rather handsome, smallish spring britzka" (3) with the California license plates through the comedic nooks and crannies of Nikolai Gogol's eternally youthful 33-year old mind, I arrive here today finally ready to tell you all that Volume One of Dead Souls was just about as funny as I'd remembered it.  Unfortunately, the incomplete Volume Two was just as "memorable" as ever as well--I didn't really remember anything from it from the first time around, but that's understandable now that I see that it's written in a way that makes you wonder how the uproarious novelist with the 1967 Love Forever Changes haircut suddenly became "unfunny" between volumes one and two.  That lone literary/hair coiffing complaint aside, I'm certainly sorry it took so long for me to ever get around to rereading Gogol's novel/"poema."  Ostensibly a novel-length tale about the antihero Chichikov's con man-like attempts to buy himself into a new tax bracket by purchasing "dead souls" to fraudulently populate a would-be nobleman's estate in provincial Russia, Dead Souls is--genre matters notwithstanding--really just a superb specimen of a Siglo de Oro-style picaresque novella metafictionally updated and transplanted to early 19th century Russia  and including an unreliable narrator just as roguish as its putative protagonist.  Before any of y'all Gogol fanboys get too mad at me over that "just," here's a solid single paragraph hand-picked to give others an idea of why I'd happily recommend this work to virtually anyone:


Happy the writer who, passing by characters that are boring, disgusting, shocking in their mournful reality, approaches characters that manifest the lofty dignity of man, who from the great pool of daily whirling images has chosen only the rare exceptions, who has never once betrayed the exalted tuning of his lyre, nor descended from his height to his poor, insignificant brethren, and, without touching the ground, has given the whole of himself to his elevated images so far removed from it.  Twice enviable is his beautiful lot: he is among them as in his own family; and meanwhile his fame spreads loud and far.  With entrancing smoke, he has clouded people's eyes; he has flattered them wondrously, concealing what is mournful in life, showing them a beautiful man.  Everything rushes after him, applauding, and flies off following his triumphal chariot.  Great world poet they name him, soaring high above all other geniuses in the world, as the eagle soars above other high fliers.  At the mere mention of his name, young ardent hearts are filled with trembling, responsive tears shine in all eyes...  No one equals him in power--he is God!  But such is not the lot, and other is the destiny of the writer who has dared to call forth all that is before our eyes every moment and which our indifferent eyes do not see--all the terrible, stupendous mire of trivia in which our life is entangled, the whole depth of cold, fragmented, everyday characters that swarm over our often bitter and boring earthly path, and with the firm strength of his implacable chisel dares to present them roundly and vividly before the eyes of all people!  It is not for him to win people's applause, not for him to behold the grateful tears and unanimous rapture of the souls he has stirred; no sixteen-year-old girl will come flying to meet him with her head in a whirl and heroic enthusiasm; it is not for him to forget himself in the sweet enchantment of sounds he has evoked; it is not for him, finally, to escape contemporary judgment, hypocritically callous contemporary judgment, which will call insignificant and mean the creations he has fostered, will allot him a contemptible corner in the ranks of writers who insult mankind, will ascribe to him the qualities of the heroes he has portrayed, will deny him heart, and soul, and the divine flame of talent.  For contemporary judgment does not recognize that equally wondrous are the glasses that observe the sun and look at the movement of inconspicuous insects; for contemporary judgment does not recognize that much depth of soul is needed to light up the picture drawn from contemptible life and elevate it into a pearl of creation; for contemporary judgment does not recognize that lofty ecstatic laughter is worthy to stand beside the lofty lyrical impulse, and that a whole abyss separates it from the antics of the street-fair clown!  This contemporary judgment does not recognize; and will turn it all into a reproach and abuse of the unrecognized writer; with no sharing, no response, no sympathy, like a familyless wayfarer, he will be left alone in the middle of the road.  Grim is his path, and bitterly will he feel his solitude (133-134).
Although Gogol doesn't need any seconds in what's obviously at least in part a Man vs. Cliché duel that's going on here in this discussion of the writer's métier, it'll help you to better appreciate one of the finer offscreen aspects of his wit if I mention that this paragraph follows a preceding one in which the money-hungry, social climber Chichikov is said to be "in the merriest spirits."  Gogol then compares his creation to a dreamy 20-year old with romantic visions of Spain who "is in heaven and has come calling on Schiller" before reality returns and "lands him back on earth, and even on Haymarket Square, and even near a pot-house, and workaday life again goes strutting before him" (131-132).  From here, it's but a short, unencumbered stroll to the duel assignation spot in the paragraph above from whence, mockingly employing both rhetorical topoi and language like a kinder, gentler version of the Comte de Lautréamont, Gogol humorously takes aim at contemporary writers and readers for only wanting to indulge in an altered version of reality--and a hypocritically sanitized one at that.  It's all pretty lighthearted as far as reproaches go, but wait, did the author really just call readers the "poor, insignificant brethren" of one type of writer and then insultingly compare human life to "the movement of inconspicuous insects" under his own writer's glass?  More on Dead Souls later in the week if, for nothing else, the chance to share a couple of other extended paragraph highlights with you.  To tide you over until then, here's a semi-random example of Gogol's mastery of the shorter, punchier, less-cerebral sentence format: "The party ended, as usual, with a fight" (196).﻿ 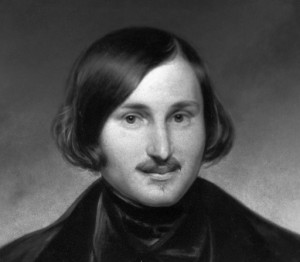 
Scott G.F. Bailey of six words for a hat
stout individuals never take a back seat
"Ha, ha, ha!" he cried with a gesture of astonishment: Dead Souls of La Mancha
soaring high above all other geniuses in the world
It would be better for the reader, if he is willing, to make up the end of that story for himself
﻿
Publicadas por Richard a la/s 04:03