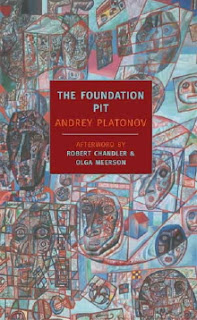 
"And who might you be?" asked the old man, folding his respectful face for an attentive expression.  "Are you a swindler...or simply a bourgeois boss?"
"I'm...I'm from the proletariat," reluctantly announced Chiklin.
"Aha--today's tsar!  In that case, I'll wait for you."
(The Foundation Pit, 47)﻿

I finished The Foundation Pit--named after the novel's not so subtle symbolic fictional foundation pit for a future, indestructible, all-proletarian, and never to be completed workers' dwelling that just might double for the Soviet Socialist Republic's grave--a few weeks back and liked it well enough despite its occasional heavyhandedness, I suppose.  However, it's really too bad that the novel's had to follow on the heels of Karl Kraus Week in the reviewing queue because not everybody can do disgruntled political satire and social commentary quite like Herr Kraus can.  Nein!  In any event, a reviewer from The Irish Times has I think rightly pegged Platonov's book, begun in the late 1920s but not published as a complete text until 1994, as an "absurdist parable."  Ditto for translators Robert Chandler and Olga Meerson, who in their afterword to the novel describe the work as "a philosophical fable" but one in which "the world [that] Platonov evokes...is a hell where both language and labor have lost their meaning, where nearly every character is alienated from his own self, and where acts of violence are seen by both perpetrators and victims as the most normal thing in the world" (157-158).  Assuming you like absurdist philosophical fables much more than I do, this all sounds great and sometimes is.  Those not so fond of absurdist poli sci schtick may well be bored at times, though.  Since Platonov probably amused me a little more often than he frustrated me, I'll try to stay positive here.  What I liked best about the work is the way it brings the recently fired/"made redundant" factory worker Vohschev (1) into contact with a cross-section of Soviet society at the height of the collectivization efforts and the terror famine--what Chandler and Meerson refer to as "among the greatest--but also the least acknowledged--catastrophes of Soviet history" (153).  This historic backdrop lends gravitas to what's occasionally some less than riveting storytelling, but on the other hand Platonov must have done something right to eventually make me feel sympathy for the orphan girl Nastya who is introduced announcing "kill the kulaks" and things of that nature.  What did I like least about the work?  Well, I guess I'm just not all that into the absurdist political humor scene, comrade.  Nyet. Also, there's nothing raw or visceral about the writing here unlike what you'd find in an alienation-fixated contemporary like Arlt or Broch: Platonov's daring is all about his themes, not his rather spaced out language.  One possible exception--Nastya, rejoicing that a big black bear "was on our side and not on the bourgeoisie's," asks a memorable question on page 108: "He suffers too...so that means he's for Stalin, doesn't it?" 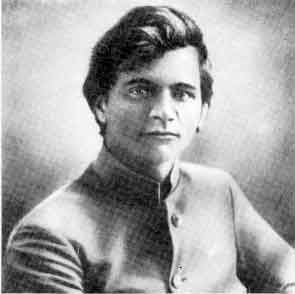 I read The Foundation Pit as 1/2 of a two-man group read with Dwight from A Common Reader--hope that he will have a response of his own to the novel up soon.﻿
Publicadas por Richard a la/s 00:32