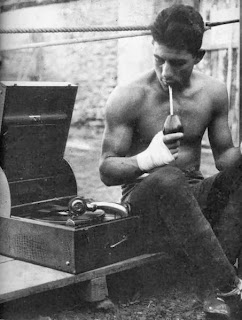 Judging by the ridiculous number of his short stories which are still awaiting a translation nearly thirty years after his death, Julio Cortázar hasn't exactly been served well by his translators.  Which is a particular shame when it comes to "Torito" because, aside from the power of the Argentine's imagination, this hard-nosed, gym rat's boxing tale has virtually nothing in common with the more cerebral Cortázar you might be acquainted with from his early "fantastic"/"surrealist" stories or those intellectual assassin tendencies on display in Rayuela.  It is, instead, a two-paragraph, seven-page monologual "cross to the jaw" that reminds me of Arlt and Onetti at their most primal.  For those of you who are already familiar with Cortázar's famous assertion that "la novela gana siempre por puntos, mientras que el cuento debe ganar por knockout" ["while the novel always wins on points, the short story should win by knockout"], I suppose it's entirely reasonable to ask: where does this story's punching power come from?  Technically, by far the coolest thing about "Torito" is that it's delivered in pre-World War II lunfardo, the one-time Buenos Aires underworld slang here peppered with Italianisms.  The narrative voice itself belongs to real-life 1930s Argentinean boxing hero Justo "El Torito de Mataderos" Suárez (photo, above), reminiscing about his heyday to a silent interlocutor who just might be you, the reader: "Qué le vas a hacer, ñato, cuando estás abajo todos te fajan.  Todos, che, hasta el más maula.  Te sacuden contra las sogas, te encajan la biaba" ["What are you gonna do, man, when you're down, everybody lays into you.  Everybody, che, even the biggest coward.  They get you up against the ropes, they dish out the punishment"] (475).  However, an equally powerful weapon in Cortázar's arsenal is the authenticity he's able to establish through his narrator's monologue.  Even if the real star of "Torito" is its language as Cortázar is said to have maintained, that's no reason to undervalue authentically sweat-soaked moments like this one where the boxer recalls the night he knocked out the British champ--"pobre rubio, lindo pibe" ["poor blonde guy, handsome kid"]--with a right hook at a bout where the Prince of England was in attendance ringside (478-479):

[I swear it gave me the chills when I saw him feet up.  What a way to sleep, poor guy.  It didn't give me any pleasure to win that time, a nice brawl would have been more like it, four or five rounds like with el Tani or that American guy, Herman, he was called, the one who showed up with a red car and mean looking as hell.  He paid, too, but it was beautiful.  What a beating, mama mía.]

On that note, I guess it's worth mentioning that the intersection between the fictionalized boxer and the biography of the real life "Torito" ["Little Bull"] Suárez might also help explain some of this story's emotional appeal.  Cortázar's Torito tells us that "todo el mundo cobra a la final" ["the whole world pays in the end"] (476), a boxing lesson with hints of a non-boxing meaning when he later adds: "Lástima esta tos, te agarra descuidado y te dobla" ["A pain this cough, it grabs you unawares and doubles you up in two"] (481).  The real life Torito, the lightweight who used boxing to escape a childhood of poverty in Buenos Aires' slaughterhouse district and eventually became so wildly popular that tango songs were written about him, died of tuberculosis at the age of 29.

*
Here's a link to the story for those who read Spanish.
Better yet, here's a link to Cortázar reading "Torito" in its entirety.  I suspect you can get a great sense of the rhythm of the story from Cortázar even if you don't know any Spanish at all. 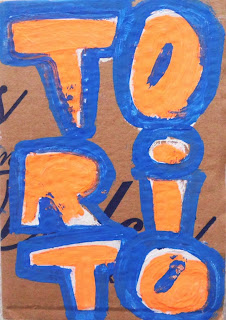 Source
I read "Torito" in Saúl Yurkievich's edition of Cortázar's Obras completas I: Cuentos (Barcelona: Galaxia Gutenberg, 2003, 475-481) because it was easy enough to get a hold of.  However, the edition of the story I'd really love to get my mitts on is the one put out by Eloísa Cartonera pictured above. Rise from Bifurcaria bifurcata wrote a post about Eloísa Cartonera and César Aira a couple of years ago--fine reading if you don't mind lusting after books that are almost impossible to find outside of La Boca in Buenos Aires.  ¡La pucha!
Publicadas por Richard a la/s 01:56