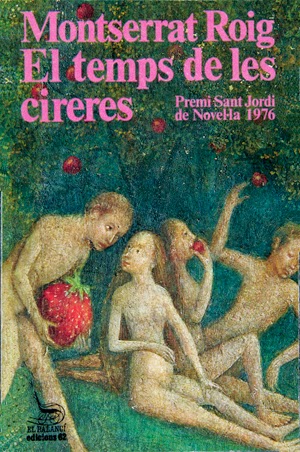 Given its garish cover, it's more than a little ironic that Montserrat Roig's Premi Sant Jordi-winning El temps de les cireres [English approximation: The Time of the Cherries], celebrated in Catalunya but apparently only the recipient of a lone translation into another Iberian Peninsula language after all these years [Spanish title: Tiempo de cerezas], often reminded me of a matte, politically-charged, photojournalism reverse image of Carmen Laforet's Nada in its representation of Barcelona at the tail end of the Franco era as framed through female eyes.  At the beginning of the novel, 30-something Natàlia Miralpeix returns home to Barcelona's l'Eixample district after twelve years "d'exili voluntari" ["of voluntary exile"] in Paris and London (14).  While the reader soon learns that the character's move into exile took place for personal rather than political reasons, her return home is almost simultaneous with the real life 1974 execution of Barcelona anarchist Salvador Puig Antich who was garroted to death in a nearby prison.  The execution naturally colors later events in the novel in that, for much of what follows, Natàlia's observations of the changes that have taken place in her native city during her absence and her account of the family dynamics that drove her away in the first place merge with a none too flattering portrait of some of the distressing continuities: the fear and repression constituting daily life under Franco's rule.  Stylistically, El temps de les cireres--while a fairly strong work overall--is clearly second tier when compared with the storytelling delights to be found in the likes of other more famous Barcelona novels like Laforet's Nada, Juan Marsé's Si te dicen que caí or Mercè Rodoreda's La plaça del diamant.  Thematically, Roig is on much more of an equal footing as many of the strengths of her novel have to do with the convincingly gray, day to day depictions of life in BCN from Natàlia's parents' time up to the character's own return in 1974.  As just one example of the hard-hitting complexities with which Natàlia's personal odyssey ties in with the city's historical trajectory during the time(s) in question, El temps de les cireres (the name comes from the Paris Commune canço composed by J.B. Clément and is described by the protagonist on p. 122 as a sense of longing for "la primavera de la felicitat" ["the Spring of happiness"]) is the sort of novel in which a description of Barcelona as "un immens cadàver esventrat" ["an immense, gutted cadavaver"] can be found side by side with more lively appraisals of the Barri Gòtic and the Barri Xinès and the sort of novel in which one man's attempt to "salvat la pell" ["save his skin"] during the Spanish Civil War by playing the apolitical card while his friends are dying in Nazi concentration camps as suspected reds (143) later turns into a despotic conformism so strong that he threatens to report his daughter to the authorities for having undergone an illegal abortion.  OK, so maybe that's two examples, but you get the picture. 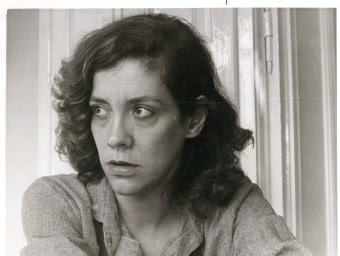 
El temps de les cireres was read with Biblibio's Women in Translation Month 2014 and Stu's and my Spanish Lit Month 2014 in mind (note: although the novel's written almost entirely in Catalan, there's frequent code-switching into Spanish during dialogue as befits the linguistic reality of its time and place).
Publicadas por Richard a la/s 14:13