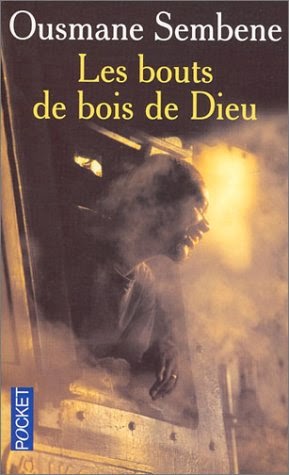 Les bouts de bois de Dieu [God's Bits of Wood], my first but hopefully not my last Francophone selection for the Books on France 2014 Reading Challenge, is an eminently worthy, particularly hard-hitting rival to Tayeb Salih's Season of Migration to the North for the title of the best African novel I've read in the last five years.  Based on the real life 1947-48 Dakar-Niger railroad strike in which hundreds of African workers shut down the French-owned line for almost half a year in an effort to wrest some hard-fought concessions from the colonial management, Sembene's novel is a gritty social realism curiosity in the sense that the railway men and their families--rather than a single protagonist--serve as the main narrative center of attention throughout.  Is this ensemble dramatic focus an example of Sembene's Marxist politics and/or his filmmaking interests informing his storytelling style?  Perhaps.  However, what's more self-evident is that the vignette-laden panoramic approach perfectly suits the epic sweep of a story of a people gradually being driven to either sell out to or to stand up against their colonial oppressors as the toubabs [whites] try to break the strike by cutting off food sales to strikers and by committing shameful acts of violence against women and children and the elderly.  Ah, civilization and progress.  So what makes the novel so compelling apart from the novelty of the group protagonist thing?  For one thing, I can't think of the last novel I read that conveyed a more convincing sense of place.  Although Sembene stops short of demonizing the French colonials or idealizing the Senegalese and other Africans supporting the strike, his depiction of local color and politics is so surehanded that even a drunken Frenchman's acid characterization of the white quarters in the city of Thiès-- "Savez-vous ce que nous sommes ici, jeune homme?  un poste avancé en pays ennemi!" ["Do you know what we are here, young man?  A forward operating post in enemy territory!"] (259)--is more than enough to delineate the confrontational state of race relations in the land.  On a related note, having casually mentioned "social realism" and "colonial oppressors" in passing above, I should probably clarify that thematically Les bouts de bois de Dieu is less about heroic resistance than about the trickier matter strike leader Ibrahima Bakayoko is forced to ponder as the bodies of the strike supporters start to pile up during the course of events: "Comment se dresser sans haine contre l'injustice?" ["How do you rise up against injustice without hate?"] (368).  A thorny issue given its due complexity here in powerfully rendered scenes with unpredictable outcomes in which a Frenchwoman patronizingly refers to the African workers on strike as "demi-civilisés...enfants" ["half-civilized children"] (257) and a Senegalese woman tearfully asks "Est-ce qu'on ne pourrait pas tuer tous les Blancs?" ["Can't we kill all the whites?"] (295).  Finally, in addition to the expected examples of powerful storytelling to be found here such as the vignette about the old man who keels over weak from hunger and then becomes food for rats or the extended passage on the women's protest march to Dakar that takes place to the insistent accompaniment of loud tam-tams, Sembene leaves the reader two unexpected ironies to mull over having to do with the intersection between language and culture and politics: 1) Who would have ever thought that the novelization of a railroad strike could be so fascinating?  2) In a work which persistently alludes to the everyday use of various indigenous languages/dialects such as Bambara, Fula, Songhay, Toucouleur, and the novelist's own native Wolof in opposition to the colonial language that one Bambara-speaking character refers to as "ce langage de sauvages" ["this language of savages"] (20), what did Sembene have in mind by using French, the language of the oppressors, rather than Wolof, which Bakayoko claims "est notre langue" ["is our language"] (271), to tell this story?  Who, in short, is the target audience for the novel which, as luck would have it, was published in Marseille the same year Senegal gained its independence from France?  Whatever, a fucking knockout.