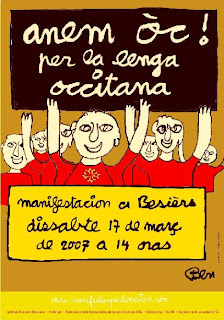 "In the name of the Father, the Son, and the Holy Spirit
Begins the song that master William made
He grew up in Tudela in Navarra, [where he] became a cleric
Then he came to Montauban, as the story will tell."


A couple of years ago, I pretty much horrified my ever-practical wife--then just recently at peace with my interest in studying Catalan--when I showed her my nice new paperback in modern French...and medieval Occitan. The work in question, the 13th century La Chanson de la Croisade albigeoise composed by Guilhelms de Tudela and an anonymous successor (excerpted above), is one of the main primary contemporary sources on the Albigensian Crusade and a great read for anyone interested in medieval history and/or the chanson de geste genre; however, sheepishly trying to explain these merits to a dona who saw medieval Occitan as just another potential detour from my Spanish studies wasn't my greatest success ever!

Fast forward to the here and now, and Occitan remains a real--if only sporadic--interest of mine as I shuffle through this shadow world of romance languages and medieval studies geekdom. Too many languages, too little time! Although I haven't been able to study any form of provençal in a classroom yet, there are at least a lot of resources devoted to it in cyberspace these days. One Occitan blog I'm fond of is Lo blòg deu Joan from Tolosa (Toulouse); it has a ton of links to other Oc-themed resources, and people with some Catalan background should be able to decipher a lot of the Occitan as well. Anem Oc!
Publicadas por Richard a la/s 19:14