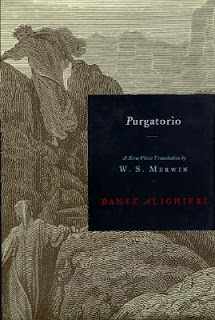 Purgatorio (Alfred A. Knopf, 2001)
by Dante Alighieri [translated from the Italian by W.S. Merwin]
Verona, 1315


Per correr miglior acque alza le vele
omai la navicella del mio ingegno,
che lascia dietro a sé mar sì crudele;
e canterò di quel secondo regno
dove l'umano spirito si purga
e di salire al ciel diventa degno.
To course on better waters the little
boat of my wit, that leaves behind her
so cruel a sea, now raises her sails,
and I will sing of that second kingdom
in which the human spirit is made clean
and becomes worthy to ascend to Heaven.
(Dante, Purgatorio I, 1-6, w/English translation by W.S. Merwin)
Welcome back to our little Divine Comedy Readalong, amici!  Will you allow me a confession?  Although I'm not really sure where I got the idea, I had this longstanding notion that Purgatorio would showcase a completely different style of poem than Inferno and that Paradiso would spotlight a completely different style of poem than Purgatorio in accordance with their subject matter and themes.  While that turned out to be at least partially true in regards to the first two canticles when all was said and done, it still took me a while before I could put my finger on the specific types of differences in play.  For whatever this observation is worth then, suffice it to say that Purgatorio opens as a continuation of the quest narrative found in Inferno.  Sans the accounts of people being buried alive, the depictions of rivers of shit, the grisly scenes of cannibalism, etc., the actual movement of the characters on their journey towards Mount Purgatory still affords Dante and Virgil plenty of opportunities to run into historical and mythical personalities on their physical and spiritual ascent.  That being said, there seemed to be an increasingly evident shift in tone between the Commedia's first two canticles as time went on.  Where the Inferno was nightmarishly flashy in tone, Purgatorio seemed to exude more of a subdued, even an instructive vibe--as if now that Dante had shown us the horrors of hell, it was time for him to show us the way out of it (or perhaps how to avoid it in the first place).  Repeated references to both singing and weeping, the latter accompanying the expiation of sin in purgatory according to Dante's extra-biblical theology of purification, call attention to the alternately joyous and sorrowful score that's omnipresent in this second stage of the narrator's journey.  I won't dwell on it here, but mention of this singing reminds me that Dante's concern with language and the poetic arts remains one of the most fascinating continuities in the poem for me.  Psalms from the Bible, the works of the pagan poets, and the verses of the Provenzal troubadours all receive props in the Purgatorio, almost (and this is a big almost, of course) as if Dante were struggling to reconcile the poetic with the divine in anticipation of Renaissance humanism. Towards the end of this middle section of the Commedia, though, the angelic Beatrice enters the poem and the father-like figure of Virgil exits it.  To highlight the momentousness of the occasion, Dante the poet aggressively ups the narrative ante with some startling vision poetry that pays homage to the Old Testament prophets and the Book of Revelation.  Whatever you make of Dante's theology in particular or allegorical poetry requiring an exegetical interpretation in general, it's hard not to be impressed with his imagination and brio.  While the visual flair of the Inferno is pretty hard to beat to my way of thinking, I have to admit that the Purgatorio might have even more to offer from a poetic or a psychological perspective.  In any event, I have a couple of follow-up posts planned to touch on some issues (gender, language, W.S. Merwin) I ran out of time to mention today.  Hope you'll stay tuned but will understand if you don't, ha ha!  Ciao. 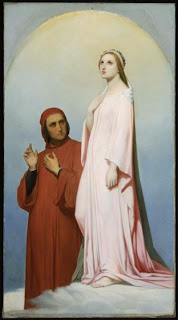