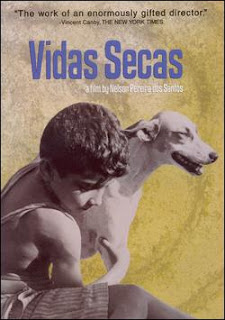 Are we all prisoners in an unknown land or is it just the unfortunate who are fucked like that?  Minus the f-word, that's one of the central questions taken up by Nelson Pereira dos Santos in his 1963 Cinema Novo film adaptation of Graciliano Ramos' subtle, deceptively simple 1938 Vidas Sêcas [Barren Lives].  A relatively straightforward but maybe not so subtle adaptation of the Brazilian regionalism classic, Pereira dos Santos' film follows migrant cowherd Fabiano, his wife Vitória, their two young sons, and their pet dog and parrot on a long, arduous journey through the sertão in northeastern Brazil in search of a new home and a refuge from famine and drought in the early 1940s.  Unfortunately for the parrot, food is so scarce that it gets eaten barely five minutes into the film.  Unfortunately for the rest of the family, life is so harsh that after a brief respite the cycle of misery will continue literally and metaphorically.  Although the film strikes me as if not exactly heavyhanded at least as more monochromatic than the book in some ways, I think it still offers several things of value to the potential viewer.  I'll limit myself to two examples here.  First, the cinematography by Luis Carlos Barreto and José Rosa is fantastic.  Vidas Sêcas was shot on location in Palmeira dos Índios in the state of Alagoas, so it affords the non-Brazilian viewer both a rare glimpse of the city where Graciliano Ramos was once mayor and--more importantly--a visual appreciation of the sertão scrubland that he might have only read about in Ramos', Euclides da Cunha's, or João Guimarães Rosa's works.  For me, worth the price of admission right there.  However, the cameramen also earn high marks for using handheld cameras and point of view footage to establish a you-are-there ambience that makes the burning sky shots of the sun even more unsettling to behold.  Second, although the narrative is raw and stripped down to a fault at times, Pereira dos Santos does a good job at interspersing the occasional surprise (i.e. a scene where Fabiano and Vitória talk over each other as if giving separate interviews to an unseen bystander and another scene where the older child mutters "hell, hell, hell" over and over again to the dog after his mother has cuffed him just for asking what hell is) with what occasionally seems like a static storytelling mix.  Of course, on that note, the best jolt of all is the one already touched on above: the non-showy but extremely effective point of view shots where, borrowing a page out of Ramos' novella, the camera follows each character's line of sight, approximating a subjectivity for the parents, the kids, and even the poor dog Baleia ("sick," possibly with rabies, below).  Baleia has the best and worst scene in the movie just as she does in Ramos' book, by the way, but it may be hard to appreciate the Pedro Páramo-like purity and transcendence of the moment when the human characters are saying things like "I want to die and get it over with" and watching birds of ill omen drink up the dwindling supplies of muddy water required by man and other beasts. 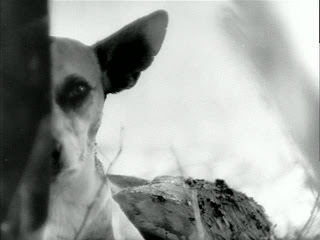 Baleia, as herself﻿
Publicadas por Richard a la/s 02:38