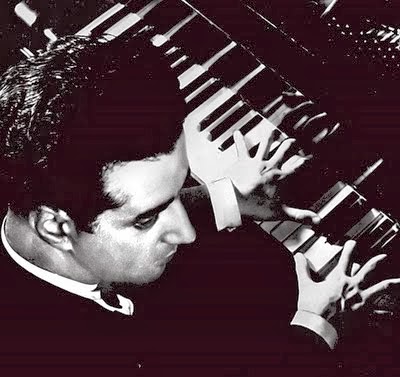 Impromptu Felisberto Hernández Week continues with two stories--or rather a short story and an anecdote.  Do I know how to work a crowd or what?  In "El balcón" ["The Balcony," readily available to non-Spanish speaking hipsters in the anthology Piano Stories], the usual Felisberto-style narrator--an unnamed piano player on tour in the provinces--gets into the usual Felisberto-style scrape--he charms a lonely, bad poetry-reciting shut-in who then has to choose between the piano player and her beloved balcony, with whom she seems to share an, ahem, unnaturally close relationship--with the usual improbably entertaining results.  How do you say "WTF" in Spanish, you ask?  Good question.  However, for our purposes, the more salient question is this: how could Felisberto have ever managed to pull off such a preposterous premise?  Three possible answers: Moxie.  A fine sense of humor.  More moxie.  I mean, it certainly doesn't hurt that Felisberto's unusual way of regarding inanimate objects as if they were endowed with life ("Contra la pared que recibía menos luz había recostado un pequeño piano abierto, su gran sonrisa amarillenta parecía ingenua" ["Backed against the darkest wall of the room was a small open piano.  Its big yellowish smile looked innocent"]) (97 in Spanish, 56 in Luis Harss' English translation) seems so natural, seems so right in context.  Still, how can I logically explain the childish delight of a story whose emotional payoff transports me back to the days when I was a seven- or an eight-year old kid happily placing coins into an organ-grinder's monkey's tiny, greedy, and last but not least nattily-attired hands?  It's almost illogical, I tell you!  On the anecdotal front, Norah Giraldi de Dei Cas, whose slender 1975 critical biography of the author (Felisberto Hernández: del creador al hombre) promises to help me extend Impromptu Felisberto Hernández Week indefinitely should I only choose to, shares an interesting tidbit about Felisberto's autobiographical novella Por los tiempos de Clemente Colling [Around the Time of Clemente Colling in its English incarnation].  At the beginning of this work, the narrator--another piano player but this time an undisguised version of Felisberto himself--makes reference to a house in his childhood neighborhood in which a madman lived.  The madman, while a minor character in the grand scheme of things, is a memorable one: he'd go down into a well to read when he didn't want to be disturbed, he lived in a room that had a "window" painted on to the wall of the house instead of having a regular glass window, etc.  As Giraldi de Dei Cas explains it, this character was based on a real person from Felisberto's childhood whose sisters (also mentioned in the novella) had dug him a well so that he could study in peace when he was in a better place in terms of his mental illness.  Not sure whether the painted-on window was a factual or an artistic touch, but it tickles me to learn that some elements of Felisberto's real life were just as fantastic or at least out of the ordinary as the ones that figure prominently in his stories.