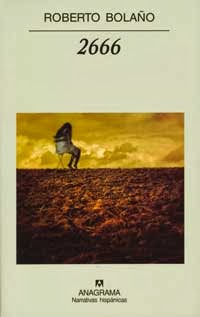 [That night there were no further manifestations of the voice and Amalfitano slept very badly, his sleep plagued by jerks and starts, as if someone was scratching his arms and legs, his body drenched in sweat, although at five in the morning the torment ceased and Lola appeared in his sleep, waving to him from a park behind a tall fence (he was on the other side), along with the faces of two friends he hadn't seen for years (and would probably never see again), and a room full of philosophy books covered in dust but still magnificent.  At that same moment the Santa Teresa police found the body of another teenage girl, half buried in a vacant lot in one of the neighborhoods on the edge of the city, and a strong wind from the west hurled itself against the slope of the mountains to the east, raising dust and a litter of newspaper and cardboard on its way through Santa Teresa, moving the clothes that Rosa had hung in the backyard, as if the wind, young and energetic in its brief life, were trying on Amalfitano's shirts and pants and slipping into his daughter's underpants and reading a few pages of the Testamento geométrico to see whether there was anything in it that might be of use, anything that might explain the strange landscape of sreets and houses through which it was galloping, or that would explain it to itself as wind.]
(2666, by Roberto Bolaño, 260; ditto, as translated by Natasha Wimmer, 202-203)

A couple of people taking part in our January and February group read of 2666 have made comments to the effect that they think Bolaño is a cold or a distant narrator in the first half of the novel (question: what will they have to say about "The Part About the Crimes"?).  Although that reaction to Bolaño is so different from my own experience of his writing--in this novel and elsewhere, in first- and third-person narrations of his--for the sake of discussion, let's assume that that opinion represents an essentially unassailable viewpoint.  Given the circumstances, what can Bolaño's so-called cold and distant style tell us about the use of the authorial voice in the first half of 2666?  Tonight: a partial answer from "The Part About Amalfitano."  Later: related responses from "The Part About the Critics" and "The Part About Fate."
*
In the merely two sentence-long passage above, which comes about 30 pages from the end of "La parte de Amalfitano" ["The Part About Amalfitano"], the unnamed and seemingly omniscient narrator matter of factly describes the night after Amalfitano first began hearing voices and thought he was going crazy.  We are told that the professor's ex-wife Lola, who has died from AIDS, appears in his dream, as do two friends whom the professor hadn't seen in years.  There's nothing particularly memorable about the first sentence's description apart, perhaps, from the amusing editorial that Amalfitano's full room worth of philosophy books are still "magnificent" despite their accumulation of dust.  As if playing off of the burial service expression "ashes to ashes, dust to dust" [Spanish: "polvo eres y polvo serás"], however, the narrator stealthily takes advantage of this opportunity to link the rather pedestrian description of Amalfitano's dream in the first sentence with the jarring revelation in the second sentence that "at that same moment the Santa Teresa police found the body of another teenage girl, half buried in a vacant lot in one of the neighborhoods on the edge of the city."  Why the linkage between this information and Amalfitano's dream?  Does Lola's presence in the dream foreshadow the presence of the death of somebody else close to Amalfitano--such as their young daughter Rosa?  Is there any explanation at all?  Whatever the case may be, note that in the continuation of the sequence, the narrator goes on to describe an almost animistic "wind from the west" which is reported as being "young and energetic in its brief life" and maybe even curious enough as an entity to want to flip through the pages of Rafael Dieste's Testamento geométrico which has been hung out on the clothesline Marcel Duchamp style.  For me, on a purely technical level, the unexpected shift in perspective from Amalfitano's dream to the wind from the west is attention grabbing storytelling that rivals that great scene in Madame Bovary where Emma Bovary abandons herself to the cad Rodolfe and her interior world and the natural world seem to join forces to celebrate her orgasm.  On a thematic level, things are a little more distressing: Juan Rulfo fans, like Bolaño was, will remember that an evil wind also figures as a protagonist in Rulfo's short story "Luvina."  More immediately, the mention of the discovery of the dead teenage girl here and the description of the "young and energetic" wind "slipping into" Rosa's panties don't bode well for the future parts of the novel from what we know of the real life rapes and murders that inspired "The Part About the Crimes."  On that note, it probably won't ameliorate the almost perverse intimacy of this scene to explain that the Spanish word for dust, polvo, is also commonly used as slang for the noun form of the f-word.  Not bad for such a cold and distant narrator, eh? 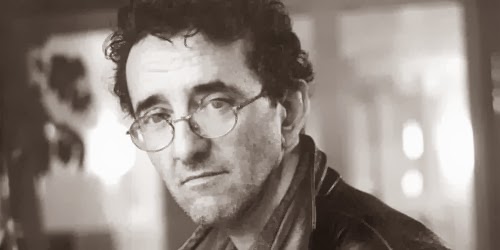