Three Readers in "The Part About the Crimes" 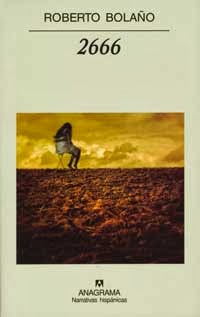 Should I feel guilty about enjoying "La parte de los crímenes" ["The Part About the Crimes"]?  For me, it's by far the most powerful, the most riveting, and maybe even the most intrinsically page-turning of all five of 2666's individual parts and yet both its subject matter--the mostly unsolved murders of hundreds of raped and/or otherwise tortured women as well as the murders that are solved but go unpunished for one reason or another--and its signature stylistic approach to the subject matter--the pairing of a forensic close-up of dozens of the dead bodies discovered in the desert between 1993 and 1997 with a Decameron-like storytelling machine dedicated to spitting out jagged biographical chunks of the lives of a host of characters either touched by or actively involved in the crimes--lead me to the uncomfortable conclusion that the text inspires me aesthetically at the same time as it arouses indignation in me thematically.  Is this what Bolaño intended?  Did he want me to be "entertained" by his fictionalization of hundreds of real life tragedies?  Or, to borrow the question posed by Theodor Adorno and apply it to the case of Ciudad Juárez, Can One Live after Auschwitz?

Put more simply, what was Bolaño's end game as far as what lessons readers should take away from his novel?  To help answer this, let's back up a bit in acknowledgement of the fact that it's become a commonplace in 2666 blog criticism for readers to assert that Professor Amalfitano's observation about the bookish Barcelona pharmacist who chose The Metamorphosis over The Trial, Bartleby over Moby-Dick, A Simple Heart over Bouvard and Pécuchet, A Christmas Carol over A Tale of Two Cities or The Pickwick Papers, and--presumably--Breakfast at Tiffany's over In Cold Blood reveals Bolaño speaking about himself and what's taking place in 2666.  Fans would argue that Bolaño does this with a wink to the readers, haters that Bolaño does it with a pat on the back and hubris.  In either case, the concluding part of the passage runs as follows (289-290 in the original, 227 in Natasha Wimmer's translation):

Whatever your take on how Bolaño intended this, it's clear that Amalfitano's observation in this passage--supposedly inspired by another character's declaration that the Austrian poet (and onetime pharmacy worker!) Georg Trakl was one of his favorite writers--offers up one possible interpretation for what readers might take away from 2666: the specter of a great writer engaging in "real combat" on the printed page.  Whether the author is successful or not is a related but secondary question in that every reader will have a scorecard of their own.  However, I think it's important to point out a second interpretation of sorts: just as Amalfitano's observation deals with a "sad paradox" about an enthusiastic but very limited class of readers, 2666 is complex enough in its message that it's neither pro- nor anti-reading as a whole in the sense of pretending to offer up a solution to "that something" which "the great masters" struggle against in Amalfitano's wording.  Bolaño's end game, i.e. what he wants his readers to take away from the novel when the book is closed, would seem to be similarly open-ended--as it should be with one fifth of the novel remaining.

If these two seemingly irreconcilable interpretations only seem to lead to a dead end, let's not forget that there are any numbers of other scenes dedicated to readers and reading (and bad readers and misreading) throughout 2666 that might point us to another way out of the exegetical labyrinth.  In "The Part About the Crimes" alone, for example, some of the more notable readers include the seer Florita Almada, a voracious reader who like Barry Seaman in "La parte de Fate" ["The Part About Fate"] reads for both utility and pleasure, the young cop Lalo Cura, who reads mostly for utility but sometimes for pleasure, and the veteran inspector Juan de Dios Martínez, who wishes he read more cultured works so he could discuss them with his love interest Elvira Campos--the well-read director of the Santa Teresa psychiatric center whose reading tastes tend toward "los libros que leía a él ni le sonaban" ["books he had never heard of"] (527 in the original, 421 in the translation).  If you were to add to this list the minor characters like the priest in the Penitent scenes said to enjoy liberation theology and the occasional detective novel, I think you'd agree that the presence of a good cross-section of "normal" readers could be found without difficulty.  Beyond that, though, there are three other more or less average readers in "The Part About the Crimes" who hold a special interest in that they seem to represent a rather contradictory lesson for how readers can expect to profit from a novel.  Who are they and what can their stories possibly tell us about Bolaño's end game?

The first of the three is Perla Beatriz Ochoterena, a twenty-eight year old poetry and essay fancier, poet, and teacher, found hanged in her room with a suicide note attributing the despondency of her final act on earth to "todas esas niñas muertas" ["all those dead girls"] turning up in Santa Teresa (646 in the original, 517 in the translation).  An extreme case and an outlier, you say, to which Juan de Dios Martínez might agree, characterizing the suicide note as "sentida" ["heartfelt"] but "también un poco cursi" ["also slightly sappy"] (Ibid.).  However, remember that Elvira Campos, who remarks that Ochoterena was probably clinically depressed, had herself entertained similar thoughts while thinking of the crimes: "A veces Elvira Campos pensaba que lo mejor sería irse de México.  O suicidarse antes de cumplir los cincuentaicinco.  ¿Tal vez los ciencuentaiséis?" ["Sometimes Elvira Campos thought it would be best to leave Mexico.  Or kill herself before she turned fifty-five.  Maybe fifty-six?"] (641 in the original, 513 in the translation).  In any event, the dead woman's home library gets a kinder review from the mental health specialist than her suicide note does from the judicial: good books, hard to find in Santa Teresa, we are told.  The second and third of the three readers are forensic scientists who split their time between police work and teaching at the local university and med school.  We learn about their reading habits when they are joined by a third medical examiner, a non-reader partial to TV watching, spending time with his family, and travel, at a work-related breakfast.  Emilio Garibay, it turns out, is an atheist, which is important insofar as "desde hacía años ya no leía ningún libro, pese en que a su casa atesoraba una biblioteca más que decente sobre temas de su especialidad, amén de algunos libros de filosofía, historia de México, y una que otra novela.  A veces pensaba que ya no leía precisamente por ser ateo.  Digamos que la no lectura era el escalón más alto del ateísmo o al menos del ateísmo tal cuál él lo concebía.  Si no crees en Dios, ¿cómo creer en un pinche libro?, pensaba" ["it had been years since he'd read a book, despite the fact that he had amassed a more than decent library of works in his specialty, as well as volumes of philosophy and Mexican history and a novel or two.  Sometimes he thought it was precisely because he was an atheist that he didn't read anymore.  Not reading, it might be said, was the highest expression of atheism or at least of atheism as he conceived of it.  If you don't believe in God, how do you believe in a fucking book? he asked himself?" (687 in the original, 550 in the translation).  Rigoberto Frías, on the other hand, is described simply as a man who "tenía muchos libros y casi ningún amigo" ["had many books and almost no friends"] (688 in the original, 550-551 in the translation].  What does this tell us about looking for meaning in reading in "The Part About the Crimes"?  You tell me!  However, in my next post on the novel, I'll introduce you to a critic, Butler University Associate Professor Gabriela Muniz, who sees 2666 as "una obsesiva búsqueda de las causas de la maldad" ["an obsessive search for the root causes of evil"] and Bolaño's "estética del cuerpo mutilado" ["aesthetic of the mutilated corpse"] as the conceptual response of "una literatura del trauma" ["a literature of trauma"] practiced by a generation of Southern Cone writers who were witness to the "tristemente famosas desapariciones de cuerpos en la época de gobiernos militares" ["sadly famous disappearances of bodies in the era of the military governments"].  These last quotes come from pages 44 and 35 respectively of Muniz's "El discurso de la crueldad: 2666 de Roberto Bolaño" ["Discourse of Cruelty: Roberto Bolaño's 2666"] (Revista Hispánica Moderna, Año 63, No. 1 [June 2010], 35-49): great, seriously eye-opening stuff.