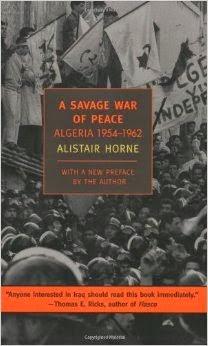 Having owned this fat 500+ page history for almost a full five years now according to the remaindered sticker on the front cover of my copy of it, I was genuinely relieved when I finally got around to finishing it both because it will never glare at me unloved from my TBR shelves again and, more to the point, Horne was just a little too good at documenting the widespread targeting of innocents in terrorist bombing campaigns and machine gun attacks, the many massacres, and all the atrocities that took place on both sides of the struggle during Algeria's war for independence.  That latter point is of course no knock on Horne or on his otherwise engrossing work informed by interviews with many of the winners and the losers of the war.  In any event, as somebody with virtually no prior knowledge of this moment in French/Algerian/French Algerian history, I thought A Savage War of Peace: Algeria 1954-1962 was more or less a model introduction to the subject of the death throes of what was once referred to as l'Algérie française.  In Part One's "Prelude 1830-1954," for example, Horne gets things started in setting up the backdrop to why mainland France would find achieving an Algerian compromise so difficult in the ensuing years by explaining that "in order to understand events from 1954 onward it is necessary to accept the existence of three totally distinct peoples - the French of France, the French of Algeria, and the Muslims of Algeria" (53-54).  In Part Two's "The War 1954-1958," Horne jumps right into the nitty gritty of the endless cycle of Muslim on white and white on Muslim violence and reprisals that will occupy his attention throughout the rest of the book, introducing the reader to such unpleasant terminology as the ratonnade (literally a "rat hunt" but here used as a euphemism for the vigilante violence entailing the rounding up and killing of Arabs as a form of blood sport revenge for violence suffered at the hands of Muslims by the pieds noirs or colonial Algerian white community) and to such topics as the Battle of Algiers and a blow by blow of the terror and torture tactics and extrajudicial killings employed by all sides during France's war with the F.L.N. (Front de Libération Nationale).  Part Three's "The Hardest of All Victories 1958-1962," primarily concerned with the end of the war in Algeria, the proliferation of pro-French Algeria right-wing extremist groups in Algeria opposed to both fellow Frenchmen and Muslim Algerians, and the eventual response of rebel French military factions so dismayed with de Gaulle's Algeria policy that they planned to take the war to the mainland and carry out a putsch on French soil, offers up more of the same but with a little more emphasis on political as opposed to military history; one French politico succinctly summarizes the mood among non-F.L.N. members with his dejected comment that "the relations between Algeria and France are a graveyard of missed opportunities" (528).  While aware that this rather bare bones outline of A Savage War of Peace doesn't really do justice to the amount of ground Horne covers in the book, I'd still like to shift gears and talk about the author as a writer rather than a historian for a moment.  Stylistically, Horne's work benefits from both the occasional well-turned phrase ("Revolt, and revenge in the Corsican fashion, were honored occupations from time immemorial," he writes about one sector of Algerian society early on [49]) and from the selection of memorable quotes ("Of the F.A.F. demonstrations, Mouloud Feraoun wrote contemptuously, 'they resemble senile beggars who masturbate in a corner to make people believe that they are virile'" [430]) that serve as a brief respite from all the neverending violence on display under the historian's microscope.  While Horne's a bit repetitive and maybe a tad old-fashioned in his biases at times--he makes several references to some variation of the description of "the blood-curdling you-you-you ululations" (431) of Muslim women, for example--perhaps that's a small price to pay given his predominantly bias-free account of years of butchery and torture and the sad but affecting way an Algerian moderate like Albert Camus gets written into and out of Horne's history as the violence escalates.  A monumental but a monumentally depressing piece of work. 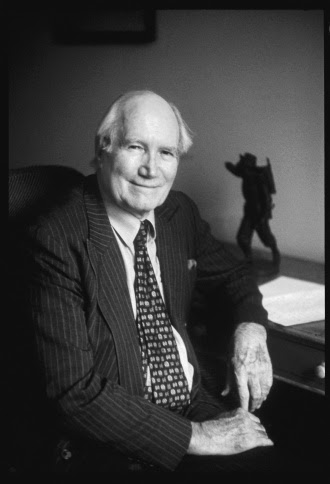