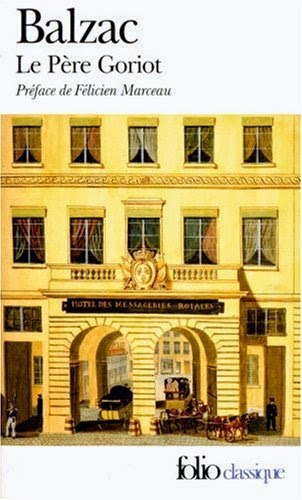 In a brief but illuminating-for-this-particular-Balzac-neophyte essay on "Honoré de Balzac's 'Vision' of Paris" included in The Cambridge Companion to the Literature of Paris edited by Anna-Louise Milne (Cambridge and New York: Cambridge University Press, 2013, 71-84), Owen Heathcote makes the claim that "Balzac's appetite for observation"--and in particular his mythification of the city in print--"has contributed to establishing what 'Paris' is to such an extent that his vision is now inseparable from the so-called actual city.  It is no exaggeration to say that this author, famed for his 'realism,' also gave us the 'idea of Paris,' a 'paper cathedral' that absorbs the material world and replaces it with text" (74).  Whatever you make of the details of Heathcote's argument, his contention provides a convenient enough prism through which to view two Parisian novels which couldn't be more dissimilar in terms of artistic quality: Balzac's grand, wrenching Le Père Goriot and the same author's dreadful, often clownish The Girl with the Golden Eyes [La Fille aux yeux d'or].  How can thinking about these two works as examples of "Balzacian Parisian novels" help us to appreciate them in a different light than we might on purely aesthetic grounds?  As many of you already know, Le Père Goriot begins with a famous extended description of a down-at-the-heels boarding house home to a motley crew of Parisians and ends with an even more famous description of another sort of Parisian rest home, Père Lachaise cemetery, from which the no longer innocent Eugène de Rastignac, a transplanted provincial, surveys a panorama of the city which has just educated him in what it will take for him to survive amid all the meanness and scheming and social climbing of his new urban milieu.  The novel's worthy of its hype on many different levels, of course, but for my $$$ one of the not so secret secrets to its success is the way the impressionable young Rastignac is forced to choose between two role models--a charismatic criminal named Vautrin who, in the course of a nearly 10 page-long rant against society, tells Rastignac that the only two choices in life are between "une stupide obéissance ou la révolte" ["mindless obedience or revolt"] (147) and that "l'honnêteté ne sert à rien" ["honesty doesn't serve anyone"] (152), and the long-suffering title character, at one point described as "ce Christ de la Paternité" ["this Christ of fatherhood"] (282), who sacrifices everything for his two daughters' well-being only to be rejected by them in his hour of need.  Rastignac's choice should be clear but ultimately isn't given the accomplished and devastating high-wire act Balzac pulls off in the finale.  Unfortunately, where Le Père Goriot tells a story of substance and depth with appropriate references to local color even at its most melodramatic (for example, as early as the third page in, a mention of the Catacombs leads the narrator to blurt out--"Comparaison vraie!  Qui décidera de ce qui est plus horrible à voir, ou des coeurs desséches, ou des crânes vides?" ["A true comparison!  For who can say what's more horrible to observe: either dried-up hearts or empty skulls?"] [23]), The Girl with the Golden Eyes is hollow, bombastic and buffoonish in its telling of what's essentially a pulp love story.  Which is not to say that the descriptions of "the soul of Paris" being responsible for its "cadaverous physiognomy" (4) aren't amusing or that the narrator's claim that "all passion in Paris is focused on two goals: gold and pleasure" (21) is any less serious a critique of the headlong pursuit of power and wealth than the one found in Le Père Goriot.  However, unintentionally funny lines like the description of hero Henri de Marsay's "slim, aristocratic waist" (34) and howlers like the Girl with the Golden Eyes' description of a love nest as "this retreat was built for love" (87) read more like a parody of a gothic novel which just happens to be set in Paris rather than the complex statement about Paris Balzac set down in Le Pére Goriot.  Heathcote, interestingly enough, provides one reason to consider taking The Girl with the Golden Eyes seriously in speaking of the "feminisation of Paris which runs throughout La Comédie humaine."  Although it pains me to even think about ever reading the ridiculous The Girl with the Golden Eyes again, I must confess that Heathcote almost tempts me with his provocative assertion that just as "'Woman,' like Paris" is both "an enigma to be solved" and "a territory to be conquered" for Le Père Goriot's Rastignac, "if, moreover, as will be seen in La Fille aux yeux d'or, Paris is also associated with the courtesans of ancient Babylon or imperial Rome, then the identification of woman and Paris extends back in time and over space: the feminisation of Paris facilitates the transformation of description into myth and the transformation of La Comédie humaine into a new, but age-old, epic with Paris as its epicentre.  At the same time, Paris also becomes a new, nineteenth century hell - both as irresistible lure and as inescapable labyrinth" (75).  Interesting thoughts to be sure--although Heathcote clearly missed a chance to go after some low-hanging fruit when he neglected to associate The Girl with the Golden Eyes' description of an elderly woman as "the old mummy" (72) with the ancient Egyptians as he maybe could have and should have given all that ancient Babylon and imperial Rome talk.  Whatever! 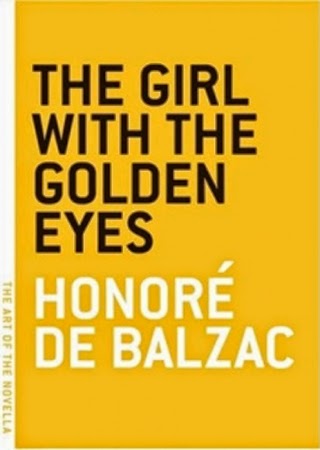 Le Père Goriot and The Girl with the Golden Eyes were books #8 and #9 out of a projected vingt-quatre read for the Books on France 2014 Reading Challenge.  Still way off the pace but a little less so than I was a month ago.  No need to play the all-novellas-in-translation card just yet, but there may be after Germinal!
Publicadas por Richard a la/s 03:08