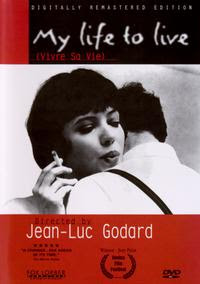 My Life to Live (1999 DVD)
Directed by Jean-Luc Godard
France, 1962
In French with English subtitles

Prostitution--or better yet--Martyrdom Week continues here at Caravana with the second classic film in a row to explore the link between the world's oldest profession and an "innocent" character's tragic search for unconditional love and freedom. In this case, you know things are probably going to turn out pretty badly for the wide-eyed Nana (Anna Karina) from the exact moment in time when she tears up watching Falconetti's soundless suffering in Dreyer's The Passion of Joan of Arc in a Parisian movie theater (below). However, Karina seduces you with such a stripped-down and soulful performance that you wind up hoping that her modern day Lulu will find some way out of the situation in defiance of all the odds against her. Godard, for his part, is both more restrained and yet no less provocative a metteur en scène than he'd be in 1966's Masculin féminin, interspersing lyrical references to film and literature with documentary-like vignettes on the prostitute's métier to the strands of Michel Legrand's haunting score. "Je est un autre," indeed. (Fox Lorber Films, out of print) 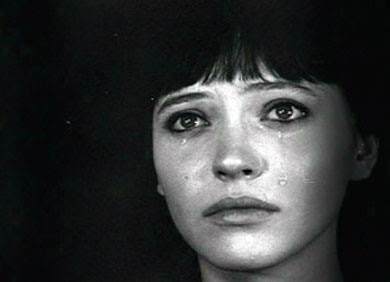