The Assemblies of Al-Hariri 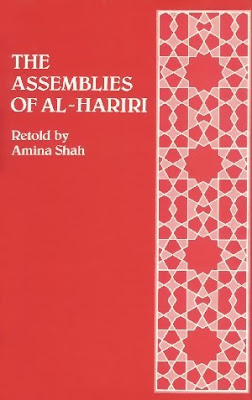 Abu Mohammed Al Kasmir Ibn Ali Al-Hariri of Basra penned these maqamat, or "assemblies," c. 1100 in an ornate Arabic freely mixing rhymed prose and verse, and they are here "retold by Amina Shah" in the closest thing I could find to a contemporary English translation. Although I first read this work some four or five years ago as one of the many unexpected side benefits of taking a medieval Spanish course of all things, I wanted to reread the maqamat to revisit "the jewels of its protagonist's phraseology" to paraphrase a dusty translation of one of its many memorable lines. The title character is one Abu Zayd of Seruj, an eloquent trickster who spends almost all of the fifty tales swindling people out of goods and money through the power of his rhetoric alone--although he isn't above disguising himself as a poor, old woman to receive alms ("The Encounter at Baghdad"), putting a wedding party to sleep with hashish to make off with the spoils ("The Encounter at Wasit"), or posing as a mufti on the road to Medina ("The Encounter Called 'Of the Portion'") in between bouts of poetic excess.

While a conversation- and learning-loving narrator (Harith, son of Haram) who's both an ardent admirer and a frequent victim of Abu Zayd's peerless con games helps lend the Assemblies a certain conceptual structure, the storytelling action takes place in various cities and caravan routes throughout the Middle East in an anything goes atmosphere designed to highlight Abu Zayd's vast linguistic bag of tricks. While sometimes only moderately interesting in translation, Al-Hariri's maqamat are absolutely mind-boggling in terms of the verbal gymnastics on display. There are multiple chapters devoted to obscure riddles and/or double meanings, for example, and the Arabic original supposedly showcases entire passages devoted to resolving grammatical questions, unveiling palindromes, and writing verses with and without accent marks and pointed letters--all within the contexts of the picaresque narrative.

Although even Abu Zayd is willing to freely admit that "nights spent in tale-telling are among the greatest of harms!" (p. 69), readers who appreciate characters that demonstrate "prowess in the strife of eloquence" (26) owe it to themselves to make the acquaintance of this boastful rogue and his literary creator, Al-Hariri. You can Google both of those names for more information than you'll ever find here, of course, but one of the funniest anecdotes associated with this collection of stories concerns the fan of the author who paid a visit to the famous Al-Hariri and was distressed to find out that his literary hero was less handsome than creative: "I am a man to be heard, and not to be seen," Al-Hariri is alleged to have wryly told him. 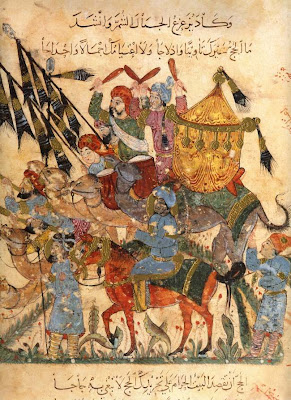