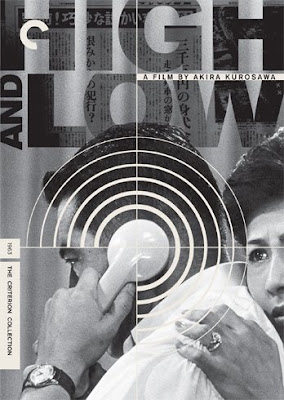 A late entry for best DVD of 2008 status. Like Francesco Rosi's similarly entertaining Salvatore Giuliano, Kurosawa's thriller High and Low (Heaven or Hell in Japanese) expertly manipulates genre expectations before turning conventional storytelling on its end. In this case, the action begins when the family of wealthy shoe company executive Kingo Gondo (the great Toshiro Mifune, delivering a commanding performance) is targeted for a botched kidnapping and extortion attempt. Fearing his son lost, the terrified Gondo initially promises to answer all the kidnapper's demands to win the boy back. But when both he and the extortionist (the chillingly charismatic Tsutomu Yamazaki) then discover that while the businessman's own son is safe but that Gondo's chauffeur's son has been captured by mistake, tension mounts when the now-reticent executive has to decide to pay the original ransom anyway--which would bankrupt his family just when he's planning to buy his way out of a corporate takeover move directed against him--or risk seeing somebody else's child suffer at the hands of a maniac. As if to accentuate the claustrophobic mood, almost all of this first part of the film unfolds in a series of elegant long takes in a single room in the Gondos' house.

While a lesser director might turn the more melodramatic elements here into something one might run into on the Lifetime Channel, Kurosawa sagely uses this plotline (and an extraordinary cast) as a means to explore the themes of greed, personal honor, and the income gap in early '60s Japan. Neatly divided in two by a frantic commuter rail sequence shot with dizzying verve after all the interior scenes that preceded it, the movie seamlessly shifts from its tension-filled first half shot almost entirely in Gondo's air-conditioned villa to an equally dramatic police procedural narrative that takes place in the less-rarified and morally and physically polluted back streets of Yokohama in the second half. Although these mirror images of the chief antagonists' positions at the opposite ends of the economic spectrum might seem a little heavyhanded when you read about them, rest assured that the hunt for the kidnapper--with its documentary-like detour through various dive bars, heroin shooting galleries, and adult entertainment districts--is pursued with more subtlety and unpredictability than you might expect from a traditional genre movie. Outstanding. (http://www.criterion.com/)