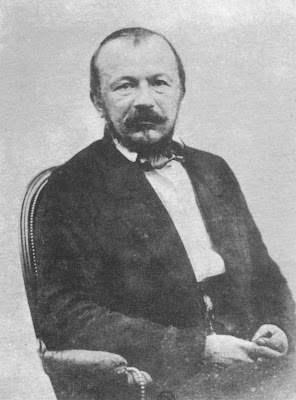 "The Poet"
by Théophile Gautier
France, 1867

I'll probably get around to posting about the rest of Gautier's My Fantoms at some point, but I wanted to pause for a moment here to sing the praises of its concluding chapter first.  Although translator Richard Holmes insists on calling "The Poet" a "story" for reasons that are beyond me, Gautier's affectionate tribute to his lifelong friend (originally published simply as "Gérard de Nerval") is decidedly more factual than fictional.  Gérard de Nerval's own life was apparently not so clearly defined in his mind, a type of fiction in its own right that was spent shuttling back and forth between the dream world and cold reality until he finally decided to hang himself one night on the Rue de la Vieille Lanterne.  If the poet's tragic end clearly traumatized Gautier, who was tasked with identifying the body in the morgue, you, the 21st-century reader with multiple reading choices at hand, need have no such fears on your part.  While the biographer's retrospectively aware of the many signs of madness that Nerval's friends were late to recognize "in those days of literary eccentricity" then in vogue in Paris (161), this doesn't stop him from illustrating Nerval's "otherness" with the choicest of anecdotes: the wonderful story about the big Renaissance bed that Nerval bought and restored in honor of his infatuation with a woman he was too timid to approach in person, the Frenchman's travels in Goethe's Germany and the "Mohammedan" Orient, the unforgettable day the poet innocently chose to walk a live lobster on a blue silk ribbon through the gardens of the Palais Royal.  Gautier's also splendid at evoking an insider's picture of bohemian Paris (for example, the riots at one of Hugo's plays) that fans of the City of Light and/or writing about writers won't want to miss.  In short, excellent reading for any of you tired of our own day and age's regard for generic but media-savvy authors who peddle their boring wares via blog tours and tweets on Twitter and the like.  Source: Théophile Gautier (translated by Richard Holmes).  My Fantoms.  New York: New York Review Books Classics, 2008, 151-173.  (http://www.nyrb.com/) 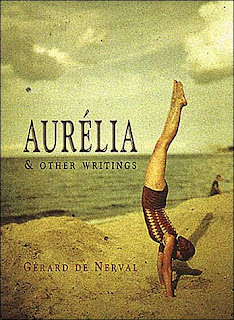 Gérard de Nerval's Aurélia & Other Writings (Exact Change) with that lovely illustration that haunts me all the more because my French version of the novella from Le Livre de Poche is so unbearably ugly.

"Why should a lobster be any more ridiculous than a dog?" he used to ask quietly, "or a cat, or a gazelle, or a lion, or any other animal that one chooses to take for a walk?  I have a liking for lobsters.  They are peaceful, serious creatures.  They know the secrets of the sea, they don't bark, and they don't gnaw upon one's monadic privacy like dogs do.  And Goethe had an aversion to dogs, and he wasn't mad."  There were a thousand other reasons, each one more ingenuous than the last.
--My Fantoms, 163