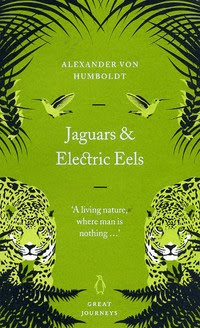 I wasn't even aware of Penguin's multi-volume Great Journey series until recently, but stumbling upon a cache of these pamphlet-sized nuggets half-priced at Brattle Book Shop in Boston about a month or so ago now has to rank as one of my book-buying year's happiest surprises. The Humboldt title, dealing with his travels in Venezuela "in tropical heat" in 1800, is a superior introduction to the collection as a whole: an abridged version of 100 of the choicest pages culled from the German naturalist's 30-volume Relation historique du voyage aux régions équinoxiales du nouveau continent that has whet my appetite for even more from the author. For a guy who's sometimes derided for having overlooked the people he encountered during his 1799-1804 travels in favor of long descriptions of the lush landscapes instead, Humboldt was a more than adequate travel companion for me here; the excerpts are full of trenchant observations about race relations in the Americas, for example, and the explorer's much more down to earth than you might expect given his full name and title and the inherent awkwardness of a situation in which an abolitionist man of science was occasionally forced to rely on slave labor to accomplish his geographical and scientific pursuits. The celebrated landscape descriptions are often fascinating as well, and passages like the one below show how nimbly Humboldt's ever inquisitive mind could move from the physical world to the world of larger truths despite his enthusiasm for the teeming New World wildlife. In other words, terribly entertaining stuff--even for someone like me who prefers to do most of his "exploring" with a coffee cup in hand! (http://www.penguin.com/) 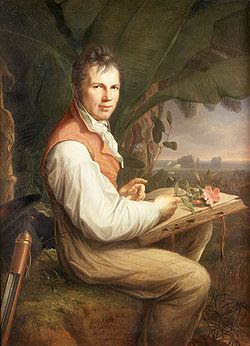 Baron Friedrich Wilhelm Heinrich Alexander von Humboldt on the banks of the Orinoco, Venezuela
(oil painting by Fredrich Georg Weitsch, 1806)
"I confess that these often repeated scenes greatly appeal to me. The pleasure comes not solely from the curiosity a naturalist feels for the objects of his studies, but also to a feeling common to all men brought up in the customs of civilization. You find yourself in a new world, in a wild, untamed nature. Sometimes it is a jaguar, the beautiful American panther, on the banks; sometimes it is the hocco (Crax alector) with its black feathers and tufted head, slowly strolling along the sauso hedge. All kinds of animals appear, one after the other. 'Es como en el paraíso' ('It is like paradise') our old Indian pilot said. Everything here reminds you of that state of the ancient world revealed in venerable traditions about the innocence and happiness of all people; but when carefully observing the relationships between the animals you see how they avoid and fear each other. The golden age has ended. In this paradise of American jungles, as everywhere else, a long, sad experience has taught all living beings that gentleness is rarely linked to might." (Alexander von Humboldt, Jaguars & Electric Eels, 65-66)
Publicadas por Richard a la/s 10:56