Adventures in the Rocky Mountains 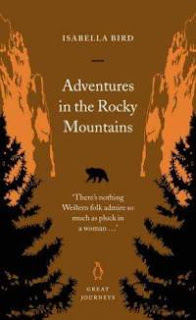 My own Rocky Mountains adventures having been limited to an infinitely less noteworthy occasion in which I once almost got snowed in at Denver International Airport for two weeks during a Boston-LAX layover, I first picked up Isabella Bird's late 19th century travelogue-in-letters (excerpted from her 1879 A Lady's Life in the Rocky Mountains) out of pure curiosity--looking for a change of pace from some heavy duty fiction I was reading at the time.  So imagine my surprise when less than 20 pages into the account of Bird's journey from San Francisco to the Colorado Territory in 1873, a stranger's anecdote about the Donner Party leads Bird to share a stomach-turning description of how the rescue party found "the German, holding a roasted human arm and hand, which he was greedily eating" (18).  Thanks a lot for the suggestion to read something lighter, Jill from Rhapsody in Books!  This grisly, "secondhand" moment aside, I should make clear that the rest of Bird's letters (written to her sister Henrietta in a style that's straightforward but animatedly attentive to local color) thankfully concentrate on what it was like for an intrepid single British lady to make her way through some wild and predominantly male-populated regions of  the U.S. West, mostly on horseback but occasionally by train, at a time of transition evident even to a foreigner.  There are many enthusiastic nature scenes for those who like that kind of stuff, some vivid accounts of local desperadoes who cross the plucky Bird's path, and--perhaps most interesting of all to this reader--a depressing analysis of one of the pressing public policy concerns of the time: "The Americans will never solve the Indian problem till the Indian is extinct.  They have treated them after a fashion which has intensified their treachery and 'devilry' as enemies, and as friends reduces them to a degraded pauperism, devoid of the very first elements of civilisation.  The only difference between the savage and the civilised Indian is that the latter carries firearms and gets drunk on whisky" (93-94).  (www.penguinclassics.com) 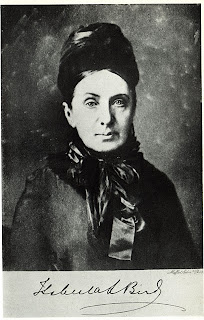 Isabella Bird
Up for Grabs
My copy of this book, a very short read at 119 pages, is up for grabs to the first person who claims it via comment below.  Will ship worldwide.
Publicadas por Richard a la/s 21:11