Life of Black Hawk, or Mà-ka-tai-me-she-kià-kiàk 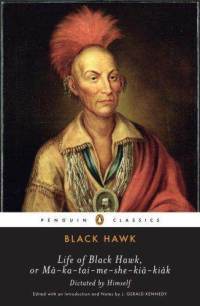 
"If another prophet had come to our village in those days, and told us what has since taken place, none of our people would have believed him!  What! to be driven from our village and hunting grounds, and not even permitted to visit the graves of our forefathers, our relations, and friends?"
(Life of Black Hawk, 46)
In an effort to get my Native American studies reading project back on track with a more unmediated native voice this time around, I decided to take a look at the 1833 Life of Black Hawk, or Mà-ka-tai-me-she-kià-kiàk, which is said to have been "dictated by himself," interpreted or translated by Antoine LeClaire, and finally transcribed by newspaperman John B. Patterson--a collaborative venture that with its uncertain English verb tenses and jarring use of non-autochthonous abbreviations like viz. makes one wonder how unmediated it really is despite the author's alleged approval of the final text as read back to him before publication.  That cautionary note on the transmission of the Life of Black Hawk aside, though, perhaps one of the main reasons to read this oral history/"autobiography" of the elderly Sauk war leader (c. 1767-1838) is for the lasting novelty of what J. Gerald Kennedy calls attention to in his introduction to the work: "never before had an Indian addressed the reading public as the survivor of a war of extermination waged by American forces" (vii).  So what was on the recently defeated Black Hawk's mind?  During the course of nearly 100 pages of plainspoken prose, the proud warrior repeatedly attempts to characterize his military actions during the just concluded 1832 Black Hawk War as a defensive attempt to maintain traditional tribal lands in and around Rock Island in present day Illinois by claiming that they were stolen by, rather than ceded to, the U.S. in the so-called Treaty of St. Louis of 1804 (see Wikipedia image below for the area in question).  While it's not clear whom in particular Black Hawk hoped to reach or sway with this appeal to the American conscience, one of the things that's most interesting about all this is that the vanquished Sauk leader, forcibly resettled on the other side of the Mississippi in Iowa at war's end, seemed to want the U.S. reading public to understand his intentions despite his realization that the former days were gone in his acknowledgement that "the tomahawk is buried forever!" (98).  It's the land, always the land, that seems to claim his attention and to position itself in the foreground of his memory.  In any event, below you'll find three examples of Black Hawk's reflections on his former homeland from pages 56, 87, and 89-90 of his Life to give you at least a sliver of an idea of why the work that bears his name will likely have a continuing appeal for those interested in the "other side" of the history of this continent and of its peoples.  (www.penguinclassics.com) 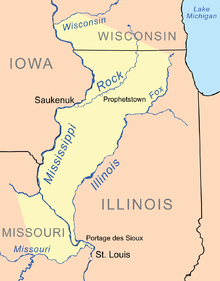 Sauk lands (in yellow) "ceded"/stolen by the 1804 St. Louis Treaty
(author: Kmusser, courtesy of a Creative Commons license for the image)
My reason teaches me that land cannot be sold.  The Great Spirit gave it to his children to live upon, and cultivate, as far as is necessary for their subsistence; and so long as they occupy and cultivate it, they have the right to the soil--but if they voluntarily leave it, then any other people have a right to settle upon it.  Nothing can be sold, but such things as can be carried away.
On our way down [the river, on a steamboat right after his surrender in 1832], I surveyed the country that had cost us so much trouble, anxiety, and blood, and that now caused me to be a prisoner of war.  I reflected upon the ingratitude of the whites, when I saw their fine houses, rich harvests, and every thing desirable around them; and recollected that all this land had been ours, for which me and my people had never received a dollar, and that the whites were not satisfied until they took our village and our grave-yards from us, and removed us across the Mississippi.
[On the surprisingly large number of inhabitants of the mountainous stretches of the Cumberland or National Road, observed by Black Hawk during his captivity tour before being relocated to his new home across the Mississippi]  I have often thought of them since my return to my own people; and am happy to think that they prefer living in their own country, to coming out to ours, and driving us from it, that they might live upon and enjoy it--as many of the whites have already done.  I think, with them, that wherever the Great Spirit places his people, they ought to be satisfied to remain, and thankful for what He has given them; and not drive others from the country He has given them, because it happens to be better than theirs!  This is contrary to our way of thinking; and from my intercourse with the whites, I have learned that one great principle of their religion is, "to do unto others as you wish them to do unto you!"  Those people in the mountains seem to act upon this principle, but the settlers on our frontiers and on our lands, seem never to think of it, if we are to judge by their actions.﻿
Publicadas por Richard a la/s 22:53