In the Shadow of Young Girls in Flower #1 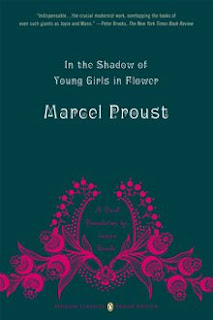 In the so-called "listless interlude" that forms the second volume of Proust's In Search of Lost Time amid that which might more aptly be called an expanding universe of richly-textured memories, emotions, and dramatis personae orbiting Marcel's teenage years and thereabouts, our young narrator manages to fall in and out of love with Gilberte, to lose his virginity to a woman he doesn't care for, and to fall head over heels in love yet again--not quite reciprocated to this point--with future girlfriend Albertine: a  journey of initiation that chronicles the agonies and ecstasies of love from Paris to Balbec with astonishing humor, insight and detail.  Sheer bliss.  While there's just too much for me to talk about here to even know where to begin, I suppose there's no harm in sharing a grab bag of personal highlights with you tonight and returning for something maybe a little more structured later in the week.  To begin with, I continue to be an easy mark for the narrator's catty but ever-observant humor.  Writing about the union between the aristocratic Swann and the ex-courtesan Odette that had taken place against all expectations since the events in Swann's Way had transpired, the narrator tells us that "in general, marriages that degrade one of the partners are the worthiest of all, because they entail the sacrifice of a more or less flattering situation to a purely private satisfaction--and, of course, marrying for money must be excluded from the notion of a degrading match, as no couple of whom one partner has been sold to the other has ever failed to be admitted in the end to good society, given the weight of tradition, the done thing, and the need to avoid having double standards."  A typical (and not all that humorous) observation with a fair amount to say about the superficiality of the circles these characters move in, gender relations at that time in France, the pressures of conformity, and so on.  What takes this to the genius level on the comedic and the descriptive fronts, though, is the sentence or the dagger that follows with such impeccable timing: "In any case, the idea of engaging in one of those crossbreedings common to Mendelian experiments and Greek mythology, and of joining with a creature of a different race, an archduchess, or a good-time girl, someone of blue blood or no blood at all, might well have titillated the artist, if not the pervert, in Swann" (42).  A second thing I loved about In the Shadow of Young Girls in Flower is how, despite the almost ubiquitous humor and the biting observations that are also present as if for adult consumption, Proust manages to tenderly and realistically evoke that teenaged daydreamer's feeling that falling in love with just about any girl is not only possible but maybe even desirable.  While the text is nearly perfect at capturing the young protagonist's mood swings between boundless optimism and utter desperation in this regard, I particularly liked this passage where the narrator talks about those moments in his life "when I was not in love but wished I was"--a fragrant time when:


the ideal of physical beauty I carried about with me--which, as has been seen, I could recognize in a distant glimpse of any passing stranger who was far enough away for the imprecision of her features not to impede that recognition--was partnered by the emotional shadow, ever ready to be brought to real life, of the woman who was going to fall in love with me and step straight into the part already written for her in the comedy of fondness and passion that had been awaiting her since my childhood, and for which every young girl I met, as long as she had a pleasant disposition and some of the physical characteristics required by the role, appeared eager to be auditioned.  In this play, whoever it was I cast as the new star or her understudy for this part of leading lady, the outline of the plot, the main scenes, and even the words to be spoken had long since taken the form of a definitive edition (469).
Finally, in thinking about the narrative tension between the ideal and the real in love and how that frontier is constantly shifting in our memories and imaginations to the point that it's possible to confuse the real object of desire with its "emotional shadow" at times, I have to say that the end of the At Mme Swann's part of this novel--with its focus on Marcel's friendship with Mme Swann rather than his traumatizing break-up with her daughter Gilberte--touched me enormously.  Can a scene from a novel be considered poetic merely by virtue of the force of its words and the power of its images?  I'll let you decide.


From all sides now, through the liquid transparency and glossy luminosity of the shadow cast on her by the sunshade, Mme Swann was being recognized and greeted by the last of the late riders, who looked as though filmed at a canter against the white midday shimmer of the avenue, members of fashionable clubs, whose names--Antoine de Castellane, Adalbert de Montmorency, and many more--famous to the public mind, were to Mme Swann the familiar names of her friends.  So it is that the average life expectancy, the relative longevity, of memories being much greater for those that commemorate poetic sensation than for those left by the pains of love, the heartbreak I suffered at that time because of Gilberte has faded forever, and has been outlived by the pleasure I derive, whenever I want to read off from a sundial of remembrance the minutes between a quarter past twelve and one o'clock on a fine day in May, from a glimpse of myself chatting with Mme Swann, sharing her sunshade as though standing with her in the pale glow of an arbor of wisteria (217).

I'll have more to share from In the Shadow of Young Girls in Flower in a day or two.  Not sure what I want to touch on next, but I'm not ready to say farewell to this volume just yet.  No, not yet.  (www.penguinclassics.com)