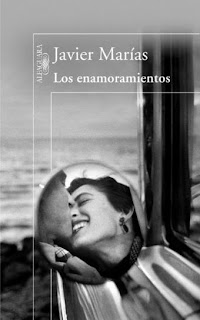 
[The last time that I saw Miguel Desvern or Deverne was also the last time that his wife Luisa saw him, which didn't stop being strange and perhaps unjust since she was just that, his wife, and I on the other hand was a stranger and had never exchanged a word with him.  I hadn't even known his name, I only learned it when it was already late, when his photo appeared in the newspaper, stabbed and with his shirt half ripped off and on the verge of becoming a dead man, if, that is, he wasn't one already in terms of his own absent consciousness that would never again return: the last thing he must have realized is that they'd stabbed him to death by mistake and without any reason, that is to say idiotically, and what's more not just once but over and over again, without mercy, with the intention of eradicating him from the planet and throwing him off the face of the earth without delay, right then and there.  "Late for what?" I ask myself.  The truth is that I don't know.]
(Los enamoramientos, 11 [my translation])

As usual in a Javier Marías novel, the narrator's concise opening statement--this one courtesy of editorial assistant María Dolz, who will learn more about Miguel Deverne's untimely death than she ever could have expected or bargained for when Deverne was just half of the "perfect couple" that she used to see at a Madrid café each morning on her way to work--provides a perfectly convenient excuse for me to avoid bothering with any sort of a synopsis of the work and just dive right in.  Unlike other Marías novels, though, Los enamoramientos [literally, The Fallings in Love but appearing in English under the much less unwieldy title of The Infatuations as translated by Margaret Jull Costa] is perhaps the closest thing that the novelist has yet come to writing a detective story.  Of course, it helps if you can imagine that detective story as a metaphysical murder mystery full of minor chord ruminations on love, mortality, and yes, the act of falling in love--but one that also tussles with the nature of crimes of passion, literature's lessons about crimes of passion, and whether love makes some crimes of passion almost forgivable from an emotional if not necessarily a juridical point of view.  Heady, sometimes desperate stuff.  So what did I like best about Los enamoramientos? That's hard to say given that it's an arresting work which gives you an unusual amount of psychological richness to ponder.  Although all the usual Marías trademarks of sinuous prose, textured Shakespearean allusions, and intelligent conversations that take place in slow motion over multiple chapters of what seem like real but visibly dilated time are all here in abundance, I guess I particularly enjoyed the nifty intertextual use made of Balzac's Le Colonel Chabert that Marías revisited off and on throughout the novel: an affecting retelling of the story of a Napoleonic era military officer who came back from mistakenly being declared dead only to die a second death of sorts upon being rejected by his wife--who believed herself a widow and had remarried--and haunted by the moaning phantoms of the corpses he had almost been buried alive with on the battlefield at Eylau.  Macbeth and a scene from The Three Musketeers receive a similarly effective treatment. I was also impressed by the fact that, despite its multiple love stories and its moments of comic relief early on (many featuring the fictional portrayal of the real life professor Francisco Rico, who has become a great comic foil for his friend Marías), this disarmingly soulful "romance" also has enough range to take up Your Face Tomorrow's twin preoccupations of how easily loved ones can walk out of your life forever (or how easily loved ones can replace you with others) and how readily senseless crimes can be committed with impunity by ordinary people whose company you might otherwise enjoy.  It's a disturbing but very thought-provoking read in that regard--especially when you consider that not only Deverne's existence but even the memory of him begin to be blotted out by the living upon his death as evidenced by so casual a thing as the confusion over the spelling of his name.  Finally, it wouldn't be a Marías novel ﻿without any number of memorable dialogue passages to read and reread and savor some more.  Since the ones I'd most like to pull from are way too long for these purposes, I hope you'll settle for this super short one that links Colonel Chabert's near fate as a presumed dead man, heaped up naked in a common grave full of cadavers according to the custom of the times, with Miguel Deverne's, stabbed to death on the streets of Madrid leaving a widow and two children behind:  "Había sido un vivo ilustre, pero ahora es sólo un muerto en medio del frío y todos van al mismo sitio" ["He had been an illustrious man alive, but now he's just a dead man in the middle of the cold and everybody goes to the same place"] (156).

The Infatuations is now out in the U.K. and is scheduled to make its U.S. appearance on Knopf in August but with one of the dumbest excuses for a book cover I've ever seen.  A white dress shirt?  Really?
Publicadas por Richard a la/s 01:47