The Cross of Honor 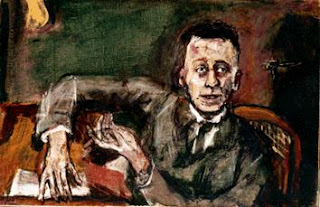 "The Cross of Honor"
by Karl Kraus [translated from the German by Frederick Ungar]
Austria, 1909

Karl Kraus, the apparent John the Baptist to Thomas Bernhard's Jesus as far as malcontent Austrian insult artists go--although unfortunately I still have to cast the role of Judas, here turns in a winning (and mostly insult-free) two and a half page production on prostitution that's sure to delight a certain type of reader.  Might you yourself qualify as that certain type of reader?  Let's put our Memento-style recap machine to the test to find out.  "For justice is a whore that will not be gypped and exacts the wages of shame even from the poor!" Kraus thunders at the end, the only "logical" conclusion to a generally pro-prostitute "social criticism" tirade in which he takes Austrian lawmakers and law enforcers to task for their bureaucratic inanities and hypocrisy regarding the regulation of the trade in the flesh.  In the anecdotal middle section of his essay, Kraus slips in a humorous tidbit about "a daughter of joy" whose parading about a brothel while wearing the military cross of honor of the title caused her unforeseen legal problems for arousing indignation rather than arousal among her civic-minded clientele.  Tsk, tsk.  Finally, for the morality police and the criminal taxonomists in our midst, there is this somewhat, ahem, anticlimactic beginning: "In Austria there is a graduated scale of culpability for young girls who embrace a life of vice.  A distinction is made between girls who are guilty of engaging in prostitution without authorization, girls who falsely declare that they are under the supervision of the police morals division and, finally, girls who are licensed to practice prostitution but not to wear a cross of honor.  This classification is confusing at first sight, yet it is in complete accord with the facts of the situation."  With this opening, Kraus rests his case--as do I.


Source
"The Cross of Honor," apparently a newspaper piece from the frisky Kraus, appears on pages 1-3 of the Dirck Linck-edited Selected Short Writings: Karl Kraus, Hermann Broch, Elias Canetti, Robert Walser a/k/a The German Library: Volume 56 (New York & London: Continuum, 2006).  The Portrait of Karl Kraus, above, is a 1925 work by Oskar Kokoschka.  More on "the angry Austrian satirist Karl Kraus" over at Tom's Wuthering Expectations blog sometime soon and probably here later in the week in between the Gogol and Platonov posts I owe some of you.﻿
Publicadas por Richard a la/s 23:32