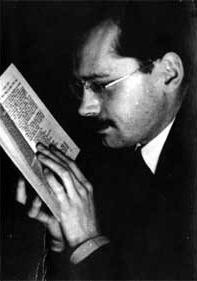 Walter Benjamin's 1931 essay on Karl Kraus and his Viennese newspaper Die Fackel, conveniently divided into the sections "1. Cosmic Man [Allmensch]," "2. Demon" and "3. Monster [Unmensch]" and all introduced by a Kraus epigraph, is almost as much fun to read as Kraus himself.  Although I hope to return to the second and third parts of the essay later in the week (the thing's just too rich to try and cover in one post), here's the German critic's attention-grabbing beginning:


In old engravings, there is a messenger who rushes toward us crying aloud, his hair on end, brandishing a sheet of paper in his hands--a sheet full of war and pestilence, of cries of murder and pain, of danger from fire and flood--spreading everywhere the Latest News.  "News" in this sense, in the sense that the word has in Shakespeare, is disseminated by Die Fackel [The Torch].  Full of betrayal, earthquakes, poison, and fire from the mundus intelligibilis.  The hatred with which it pursues the tribe of journalists that swarms into infinity is not only a moral hatred but a vital one, such as is hurled by an ancestor upon a race of degenerate and dwarfish rascals that has sprung from his seed.  The very term "public opinion" outrages Kraus (361).
While you'd think it'd be hard to maintain the intensity level of that opening, Benjamin shifts from this "visual" introduction of Kraus to a descriptive appraisal of Kraus' motivations without any appreciable loss of adrenaline.  After calmly stating that the empty phrase is Kraus' enemy, "the unmasking of the inauthentic" is the source of his hatred of the press (362-363), Benjamin launches into a feverish appreciation of Die Fackel's role in the combat:
The intertwining of biblical magniloquence with stiff-necked fixation on the indecencies of Viennese life--this is its way of approaching phenomena.  It is not content to call on the world as witness to the misdemeanors of a cashier; it must summon the dead from their graves.  --Rightly so.  For the shabby, obtrusive abundance of these scandals in Viennese coffeehouses, the press, and society is only a minor manifestation of a foreknowledge that  then, more swiftly than anyone could perceive, suddenly arrived at its true and original subject: two months after the outbreak of war, Kraus called this subject by name in his speech "In These Great Times," with which all the demons that inhabited this possessed man passed into the herd of swine who were his contemporaries (363-364).
Although I'd already want to read more about Kraus (and read more by Benjamin) from that last line of Benjamin's alone, the essayist inserts a head-spinning excerpt from "In These Great Times" (the mercurial Kraus: "Let him who has something to say step forward and be silent!") before adding:
Everything Kraus wrote is like that: a silence turned inside out, a silence that catches the storm of events in its black folds and billows, its livid lining turned outward...the polemical possibilities of every situation are totally exhausted.  With what precautions this is surrounded can be seen from the barbed wire of editorial pronouncements that encircles each edition of Die Fackel, as from the razor-sharp definitions and provisos in the programs and lectures accompanying his readings from his own work.  The trinity of silence, knowledge and alertness constitutes the figure of Kraus the polemicist (364-365, ellipses added).
Those of you who know how Kraus ended his career will understand why Benjamin was startlingly prescient about the Austrian polemicist here.  Those of you who know how Benjamin ended his career may well wonder whether the writing was already on the wall for both of these men.
Source
"Karl Kraus" appears on pp. 361-390 of the Walter Benjamin anthology, The Work of Art in the Age of Its Technological Reproducibility and Other Writings on Media, edited by Michael W. Jennings, Brigid Doherty, and Thomas Y. Levin (Cambridge & London: The Belknap Press of Harvard University Press, 2008).  Walter Benjamin photo above: photographer unknown.﻿
Publicadas por Richard a la/s 00:05