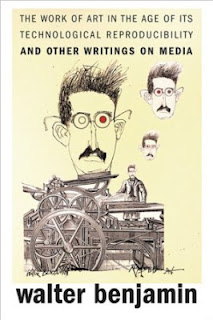 "Karl Kraus"
by Walter Benjamin [translated from the German by Edmund Jephcott]
Germany, 1931
﻿
As quotable as Benjamin is throughout his wide-ranging essay on Kraus, it's in the middle section, "Demon," where you really begin to appreciate his profundity and his artistry as a critic.  Benjamin doesn't see Kraus as a polemicist who is drawn to pontificating about evil in order to perform some greater good for the rest of us.  In fact, he scoffs at the idea of Kraus as an "ethical personality" at all: "The dark background from which Kraus's image detaches itself," Benjamin writes, "is not formed by his contemporaries, but is the primeval world [Vorwelt], or the world of the demon" (370).  Kraus' vanity, "his unconquerable need to be perceived" is undeniable according to the critic.  But to what end?  Benjamin sees it as arising from a complex interplay of "self-expression" and "self-unmasking" in which, perhaps unwittingly at times, Kraus offers up his own life as a performative "sacrifice to his vanity" (370-371).  Benjamin: "Idiosyncrasy as the highest critical organ--this is the hidden logic of that self reflection and the hellish state known only to a writer for whom every act of gratification becomes at the same time a station of his martyrdom, a state experienced, apart from Kraus, by no one as deeply as by Kierkegaard."  Kraus, quoted by Benjamin: "I am perhaps the first instance of a writer who simultaneously writes and experiences his writing theatrically" (371).

Kraus' "mimetic genius, imitating while it glosses, pulling faces in the midst of polemics," inspires some of Benjamin's finest, most penetrating writing about "the demon in the man" that is Kraus (371).  You don't, I hope you'll agree, even need to know anything about Kraus to appreciate an arresting description like this:


[Kraus] imitates his subjects in order to insert the crowbar of his hate into the finest joints of their posture.  This quibbler, probing between syllables, digs out the larvae that nest there in clumps.  The larvae of venality and garrulity, ignominy and bonhomie, childishness and covetousness, gluttony and dishonesty.  Indeed, the exposure of inauthenticity--more difficult than that of the merely bad--is here performed behavioristically.  The quotations in Die Fackel are more than documentary proof: they are the props with which the quoter unmasks himself mimetically.  Admittedly, what emerges in just this connection is how closely the cruelty of the satirist is linked to the ambiguous modesty of the interpreter, which in his public readings is heightened beyond comprehension.  "To creep"--this is the term used, not without cause, for the lowest kind of flattery; and Kraus creeps into those he impersonates, in order to annihilate them.  Has courtesy here become the mimicry of hate, hate the mimicry of courtesy?  However that may be, both have attained perfection, absolute pitch.  "Torment," of which there is so much talk in Kraus in such opaque allusions, here has its seat.  His protests against letters, printed matter, documents are nothing but the defensive reaction of a man who is himself implicated.  But what implicates him so deeply is more than deeds and misdeeds; it is the language of his fellow men.  His passion for imitating them is at the same time the expression of and the struggle against this implication, and also the cause and the result of that ever-watchful guilty conscience in which alone the demon is his element (371-372).

It would be easy enough to stop at this point given how much Benjamin has already shed light on the slippery Kraus, but he isn't done trashing the explanations of the Kraus fans who posit "compassion" as one of the hidden wellsprings of the Austrian's art:

No!  This incorruptible, piercing, resolute assurance does not spring from the noble poetic or humane disposition that his followers are so fond of attributing to him.  How utterly banal, and at the same time how fundamentally wrong, is their derivation of his hatred from love, when it is obvious how much more elemental are the forces here at work: a humanity that is only an alternation of malice and sophistry, sophistry and malice, a nature that is the highest school of aversion to mankind and a pity that is alive only when interlaced with vengeance (372).

Is Benjamin's a partisan study?  You be the judge.  Citing Brecht's great quote about Kraus, "When the age laid hands upon itself, he was the hands" (372), Benjamin then moves on from Kraus' primal desire for vengeance to his apocalyptic vision of justice.  Whatever you make of the argument, the language itself is impeccable, insistent: "Nothing is understood about this man until it has been perceived that, of necessity and without exception, everything--language and fact--falls, for him, within the sphere of justice.  All his fire-eating, sword-swallowing philology in the newspapers pursues justice just as much as language" (373).  But where does this sense of justice originate from other than from within the demon himself?  One of Benjamin's answers may surprise you for it's none other than Baudelaire whom he sees as one of Kraus' spiritual ancestors:

Only Baudelaire hated, as Kraus did, the satiety of healthy common sense, and the compromise that intellectuals made with it in order to find shelter in journalism.  Journalism is betrayal of the literary life, of mind, of the demon.  Idle chatter is its true substance, and every feuilleton poses anew the insoluble question of the relationship between the forces of stupidity and malice, whose expression is gossip.  It is, fundamentally, on the complete agreement of two forms of existence--life under the aegis of mere mind, and life under the aegis of mere sexuality--that the solidarity of the man of letters with the whore is founded, a solidarity to which Baudelaire's existence is once again the most inviolable testimony (376).

Benjamin concludes this part of his work with a somewhat complicated--and perhaps not altogether convincing--argument linking Kraus' hatred of the press with his defense of prostitution, the commoditization of words and the commoditization of the flesh (a Kraus flashback: "Penury can turn every man into a journalist, but not every woman into a prostitute" [375]).  Although I'm not sure I buy all of it, I have to admit that Benjamin's musings on sexuality and the mind as it possibly pertains to Kraus did permit one final sneak attack that sort of waylaid me.  The subject?  An evocation of Kraus' nights which, perhaps on account of its lack of romanticism about the tortured artist, speaks to me more than it otherwise should:  "His night, however, is not a maternal night, or a moonlit, romantic night: it is the hour between sleeping and waking, the night watch, the centerpiece of his threefold solitude: that of the coffeehouse, where he is alone with his enemy; of the nocturnal room, where he is alone with his demon; of the lecture hall, where he is alone with his work" (377).

Source
"Karl Kraus."  In Walter Benjamin, The Work of Art in the Age of Its Technological Reproducibility and Other Writings on Media, edited by Michael W. Jennings, Brigid Doherty, and Thomas Y. Levin (Cambridge & London: The Belknap Press of Harvard University Press, 2008, 361-390).﻿
Publicadas por Richard a la/s 03:20