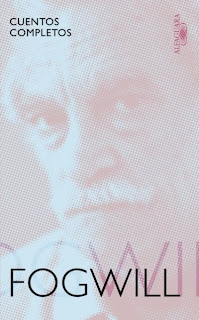 One of the more curious things I've seen Borges taken to task for over the years is the idea that his oeuvre is so lacking in sex and romance that it might almost be classified as asexual as a whole.  Fortunately for Borges and his admirers, in the Argentinean Literature of Doom: Año 2 year of 1983, Fogwill came to JLB's rescue so to speak with this graphic sex-ridden, scatological, and drug use-filled parody of Borges' "El aleph" in which a vibrator referred to as "el concejal" ["the Town Councillor"] plays an all too prominent role.  Shall I continue?  Although I'm not sure how many other people could have even dreamed up a Borges meets Osvaldo Lamborghini hallucination of this nature, Fogwill mostly pulls it off with a pair of nifty Borgesian anagrams (Help a él = "El aleph," of course, and the narrator's suicide muse Vera Ortiz Beti is a not so subtle re-scrambling of "The Aleph"'s Beatriz Viterbo sans the second "B" for Borges, who's never mentioned by name in the novella), a frisky sense of humor, a series of Buenos Aires in-jokes, and a surprisingly tender ending given all the bodily fluid excesses and occasional sadomasochism that precede it.  Those sex scenes are something else, though, and I don't mean that in a good way!  Thankfully, the humor is both verbal and visual: in one instance, the uncle of the narrator's writer friend Laiseca calls his nephew a great writer before quickly adding: "--... Lo que quiere decir --agregó-- que será un perfecto fracasado.  ¡Lástima que la prima no viva para apreciar el éxito de su fracaso...!" ["'Which means,' he added, 'that he'll be a perfect failure.  What a  shame that his aunt isn't alive to witness the success of his failure!'"] (246); in another, the narrator notes how the photos of Evita and Perón on the wall of Laiseca's bedroom are accompanied by others of Mao, Mussolini, Hitler and Oliveira Salazar (249).  The in-jokes, too, are both literary and political.  Adolfo B. Laiseca, the narrator's "perfect failure" of an acquaintance, bears a name that pays homage to both Borges' well-known writer friend Adolfo Bioy Casares and Fogwill's lesser-known writer friend Alberto Laiseca, for example, and there's another reference to an "inédito de Leonor Acevedo, que atesora Piglia" ["an unpublished work by Leonor Acevedo which Piglia possesses"] (261) which would seem to be an approving wink at the stunt that Ricardo Piglia pulled off in 1975 when he published an original novella titled Homenaje a Roberto Arlt [Homage to Roberto Arlt] and passed it off as the critical edition of a lost Arlt manuscript that had just been discovered.  It may help you appreciate Fogwill's literary joke more if you realize that his Arlt, Leonor Acevedo, just happens to share the same maiden name as Borges' mother; similarly, it may help you appreciate Fogwill's edgy political game more if you realize that the name of Vera Ortiz Beti's friend, Idische Zeitung, was the name of a Buenos Aires Yiddish weekly that was once closed down by the military government in the 1940s and that another minor character is an arms importer who likes to play cards at the nearby naval base.  Considering that Fogwill's previous claims to fame for me were the writing of "Muchacha punk" (one of my all-time favorite short stories), the penning of Los pichiciegos (one of my all-time favorite Spanish-language novels), and the nicknaming of García Márquez as García Marketing (one of my all-time favorite dismissive nicknames), I'd have to say that even though Help a él doesn't quite resonate for me at those same sorts of levels, it's still quite the one-stop shopping experience for anyone desiring a late Dirty War era read that insults "turistas argentinoides" ["Argentinoid tourists"] playing Beatles songs  in Uruguay (242) and riffs on the concepts of Buenos Aires as a "puerta falsa en el tiempo" ["trap door in time"] (Ibid.)) and the way that the dead live on in "las memorias y las fabulaciones de los vivos" ["the memories and the inventions of the living"] (284) all while--hmm, how can I put this delicately?--sexing Borges' cherry.


Source
Help a él appears on pages 235-284 of the Fogwill anthology Cuentos completos (Buenos Aires: Alfaguara, 2009).  Naturally, this novella (and hardly anything else for that matter by the mighty Fogwill [1941-2010]) isn't yet available in English translation.﻿
Publicadas por Richard a la/s 03:03