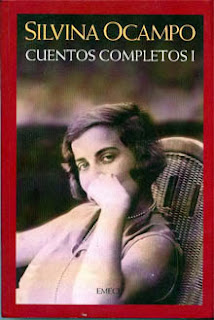 [In the doorway of a store, I had to witness a fight between two men.  I didn't want to see the hidden knife, I didn't want to see the blood.  The struggle resembled a desperate embrace.  I fancied that the agony of one of them and the longed for terror of the other was the final reconciliation.  Without being able to erase that dreadful image for one instant, I had to witness the spotless death, the blood which in a few days would be mixed with the street's earth.]
(Autobiografía de Irene, 158, w/my translation)﻿

[When Lucio's parents returned from their trip, they didn't learn who the girls were who had visited him on his birthday and they thought that their son had clandestine relationships, which was, and probably continues being, true.
But Lucio was already a little man, un hombrecito.]

Note: according to the number of candles on his birthday cake, a six year old hombrecito at that!﻿