Journalism, Duplicity and the Art of Contrasts 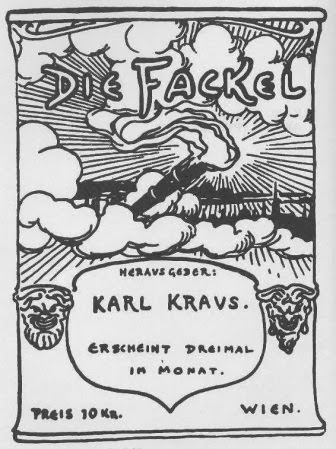 "Journalism, Duplicity and the Art of Contrasts"
by Edward Timms
England, 1986


The significance of the emblems which Kraus placed on the cover of Die Fackel in April 1899 will by now be clear.  The mask is the all-pervasive symbol of fin-de-siècle Vienna.  In Kraus's design the grinning mask of comedy and the goatish face of the satyr not only proclaim the intention of comic and satirical stylization.  They also convey an acute awareness of the elements of theatricality and disguise in Austrian affairs.  And the rays emanating from the flaming torch are thrown forward in a pattern that suggests the boards of a stage.  The aim is clearly to break through the clouds of mystification and shed light behind the scenes.  But the configuration of images leaves open the question of the role the editor himself will play in the satirical masquerade.
(Karl Kraus, Apocalyptic Satirist: Culture and Catastrophe in Habsburg Vienna, 29)

The passage above, the closing paragraph from chapter 1 of Karl Kraus, Apocalyptic Satirist, sets the stage so to speak for a shift in focus from the broader panorama of Viennese life c. 1900 to a tight close-up of Kraus's evolving role as an attacker of the Viennese and Austrian media.  Chapter 2, "Journalism, Duplicity and the Art of Contrasts," traces Kraus's transformation from a would-be theater critic to an "increasingly uncompromising" voice intent on attacking "the corrupting influence of the press itself" (35).  What led to Kraus's "increasingly uncompromising" stance?  To help explain things, Timms points to the era as one in which the press achieved "a greater domination over public affairs than in any period before or since" (30) and one in which the Austrian press in particular functioned as either a mouthpiece for the highest bidder or as a front for the state.  "It was the era of the 'newspaper baron' - the owner-editor who had control both of share capital and of editorial policy," he explains.  "Individual owners could exercise almost feudal power over an apparatus whose technological sophistication belonged to the  modern age" (Ibid.).   On the newspapers' collusion with the government, he adds: "The net result of this collaboration was to subvert democratic government, falsify public opinion, and add a further dimension of unreality to Austrian life" (31).  Never shy about pulling a revealing anecdote out of his pocket, the author then illustrates his point with the example of Die Presse founder August Zang, who "is quoted as saying that his ideal would be 'a newspaper that did not contain a single line that had not been paid for'" and mentioning the fact that "the device of printing advertisements disguised as news items was accepted journalistic practice" (32).  As an explanation more concerned with matters of style than the duplicity of the newspapers themselves, Timms also explains the influence of satirical forerunners Ferdinand Kürnberger and Daniel Spitzer as models for the early Kraus.  According to Timms, the former, who memorably retorted to readers who complained that he was injecting too much politics into their arts section by asking, "Am I writing about politics?  [...]  I am writing the theatre review of the Austrian tragedy" (33, love it!), eventually wins out over the latter as a more suitable role model for Kraus given the increasingly violent and unstable atmosphere near the end of the 1890s.  Ever insightful about his subject, though, Timms takes this opportunity to make what I think is a terrific, nuanced observation: "The contrast between Kürnberger and Spitzer defines a polarity that runs through the work of Kraus himself - the tension between vigorous polemical commitment and self-absorbed verbal artistry" (34).

Moving on from Kraus's influences to his early work in Die Fackel, Timms then explains how the future apocalyptic satirist was able to maintain an "independent voice" (35) in such a turbulent atmosphere for the press: Kraus's father covered the publication costs of the first issue of Die Fackel, and its status as an instant hit made it financially self-sustaining afterward.  Ironically, while not above making disparaging comments about the "tip-receiving classes" (34), Kraus's own personal economic well-being and privilege resulted in a journal which was "explicitly reformist" despite its "polemical vitality and wit" during the first five years or so of its run.  As Timms stresses, Kraus's aim at this point was "amendment, not entertainment" (36-37).  Why is this an important distinction?  First, Kraus's "mission as a satirist was to attack ideological thinking in all its forms, not merely those he happened to personally dislike" (37).  Second, it explains another "paradox which runs right through Kraus's writings.  As a reformist critic he certainly wished to raise the standards of Austrian journalism; but as satirist he proclaims that the press is irredeemably corrupt" (41).  If I understand the ensuing argument correctly, Kraus's recognition of this "paradox" eventually resulted in a renunciation of such reformist tendencies in favor of a more pure polemical outlook as time went on.  But in the early days at least, the future crank was almost an optimist: Timms claims that Kraus "wanted to teach people to read - to read the public prints with scepticism and mistrust" and that he even seemed "to entertain the hope that a revival of civilization as a whole might be achieved through the growth of critical enlightenment."  The enemy?  In Kraus's marvelous phrasing, "a civilization corroded by printer's ink" (41)!

For those who have read Kraus before and who are maybe wondering along with me how much of his vituperative brilliance was due to artistic purity and how much was due to him just being a bit of a nutjob, Timms has some extremely interesting things to say about the satirist's personality or predispositions--in particular about Kraus's apparently heightened sensitivity to masks and other forms of duplicity.  "Kraus's whole mode of perception seems to have been shaped by a sensitivity to masks and disguises," he writes, a "subjective factor" (44) that helps explain the motif of the mask as "a unifying principle underlying [Kraus's] writings" when those same writings are "so diverse" in themes in the early years of Die Fackel that its readers may well be left "with an impression of fragmentation and incoherence" (42).  To explain this, Timms zeroes in on the fact that "it is not simple inhumanity, it is the more complex phenomenon of duplicity that Kraus attacks" in a series of articles on a coal miners strike (Ibid.).  Beyond that, "it is this seminal image of the mask which gives a structural coherence to Kraus's early writings, particularly to his critique of the press.  What he attacks most forcefully is not its financial corruptness, but the discrepancy between its shady financial dealings and its resplendent cultural prestige."  Or, as Kraus puts it, "the press is a prostitute which in Austria wears the robes of a priestess" (Ibid.).  According to Timms, for Kraus, "this theme of duplicity finds its most intense focus in the problem of Jewish identity...  The Jews of Vienna found themselves caught between two cultures: the traditional Judaic community and modern secular society.  This was made embarrassingly evident by the fact that many Jews had two different names" because "a decree signed by Joseph II in 1787 had imposed German surnames on Austrian Jews" (43, ellipses added).  The upshot of all this as it pertains to the Die Fackel firebrand?  "For Kraus," himself an assimilation-minded Jew apparently troubled by both antisemitism and Zionism, "these assimilated names were a disguise.  When Felix Salten tries to establish himself as authentically Viennese, readers of Die Fackel are reminded that behind that aristocratic-sounding name there lurks an immigrant from Budapest called Zsiga  Salzmann."  Ouch!  "Indeed, there were so many Samuels masquerading as Siegfrieds that Kraus could with some justice speak of a 'pseudonymous civilization'" (Ibid.).  With a young Adolf Hitler waiting in the wings of this "polyglot Empire," it's no surprise that Timms points to the "rich" but "problematic" nature of Kraus's "satire on the duplicity of names"--while stopping just short of calling Kraus out for hypocrisy (Ibid.).  However, I like where he takes it from there in terms of the satirist's work as whole.  Kraus, supposedly "wavering between what he calls 'social' satire and a more 'literary' style that would be modeled on the work of earlier authors," in October 1907 describes his métier as follows: "I am a satirist, and my gaze is caught by contrasts.  What matters is not what I think about the Austro-Hungarian Compromise, but what I think about the type of person who ought to be thinking about the compromise" (44-45).  Timms, explaining the importance of "Kraus's preoccupation with duplicity" as something that "provides a structural explanation for what appears to be an ideological bias," gets the last word here in response: "At times Kraus's sensitivity to disguises obstructs his perception of the historical balance of forces.  And it certainly impairs his political judgement.  But for one task it left him admirably equipped: for the writing of satire and polemic.  It is here that his antithetical sensibility comes into its own.  For satire is the art of contrasts" (45-46). 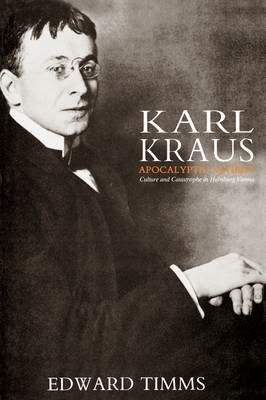