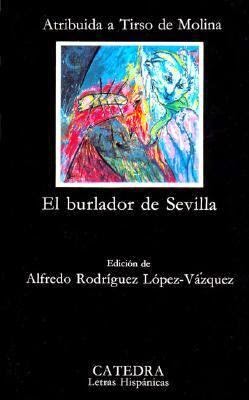 With apologies to Amanda and Tom, who read and reread all three acts of El burlador de Sevilla [The Trickster of Seville] w/me for June's Caravana de recuerdos group read while I was out picking up the beer and munchies on the "Latino time" that's now dragged into late July, I've been putting off writing about this Siglo de Oro classic because I don't really have all that much to say about the play.  Didn't love it.  Didn't hate it.  Don't quite understand its accumulation of four centuries of hype.  On second thought, that last part isn't entirely true because one of the most understandably appealing things about the play is that it boasts the memorably unappealing title character in the form of the original Don Juan.  "Unappealing," as I've just used it, is of course a value judgement about the character's womanizing ways.  What's appealing about him as a character, though, is the way he's so dedicated to his craft!  In the first scene alone, for example, he has to flee Naples after having impersonated a duke and falsely wedded the Duchess Isabela just to enjoy the duchess' favors.  Early in the second act, in the midst of leaving a trail of seduced and deceived women in his wake upon his return to Spain, he brags about how he came about his nickname: "Sevilla a voces me llama/el Burlador, y el mayor/gusto que en mí puede haber/es burlar una mujer/y dejarla sin honor" ["Seville sometimes refers to me as the Trickster, and for me there is no greater pleasure than to deceive a woman and to leave her without honor"] (verses 1395-1399).  In the third act, the incorrigible Don Juan gleefully chides yet another "false bride" of his in an aside: "¡Qué mal conoces/al burlador de Sevilla!" ["How poorly you understand the Trickster of Seville!"] (2229-2230).  In short, the character is a singularly compelling villain in that he never seems repentant for his behavior no matter what harm it causes--and this in a play in which a friend of his can casually joke about a woman who survived a bout of "el mal francés/por un río de sudores" ["syphillis sweated out in a river of fever"] (1308-1309) and in which another woman spurned by Don Juan asks for him to be killed for having been the "homicida de mi honor" ["murderer of my honor"] (1657).  The undeniable negative charisma of Don Juan and the earthy realism of that VD reference aside, another couple of reasons I might/probably will revisit the play in the future are that it's mischievously "poetic"--loved the description of "la espumosa orilla/del mar de Italia" ["the foamy shores of the Italian sea"] as the site of Don Juan's "cárcel" ["prison"], in reference to the cad's initial expulsion from Castile to Naples (117-121); ditto the description of Isabela as a "fea" ["ugly woman"], even though she must be an "ángel" ["angel"], when compared to the daughter of the Commander of Calatrava, whose beauty moves the King of Castile to astronomically rhapsodize her as "el Sol de las estrellas de Sevilla" ["the Sun of all the stars of Seville"] (1190-1199)--and goofily entertaining w/r/t the way the poor skirt-chasing Trickster eventually receives his supernatural comeuppance at the hands of a guest of stone from beyond the grave: I mean, I understand that revenge is a dish best served cold and all, but nobody ever told me that it could be jazzed up by scorpions, fingernails, and snakes! 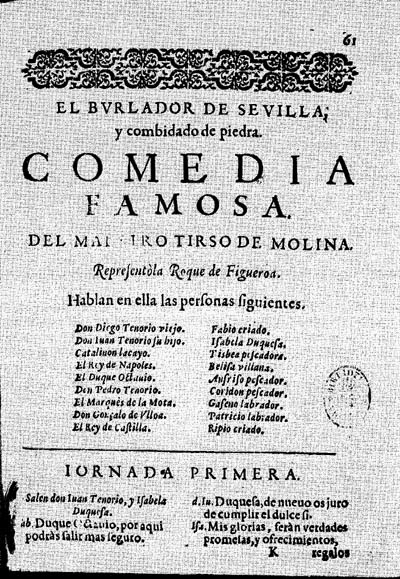 In his introduction to the Cátedra edition of El burlador de Sevilla, Alfredo Rodríguez López-Vázquez does a pretty convincing job of casting doubt on Tirso de Molina as the author of the work.  The arguments are too complicated to go into here, but I'll try to follow up on this in a later post if anyone's interested.  Until then, thanks again to Amanda and Tom for reading this along with me.
Publicadas por Richard a la/s 03:41