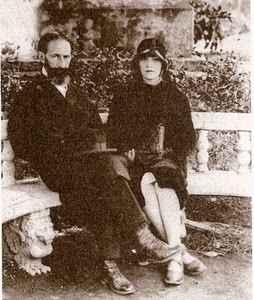 One of the cooler things about the gory tale of terror "La gallina degollada" ["The Decapitated Chicken"]--aside from the fact that I found a link to the story in translation for those unable to read the work in its, ahem, colorful and vivid and bloodbath Spanish--is that it allows the important early 20th century short story stylist Horacio Quiroga to finally make his Spanish Lit Month debut in front of our huge international audience of confirmed genre fans.  As the bullet points on his vita all sadly attest, the Uruguayan Quiroga (1878-1937, photographed with one of his wives above), sometimes referred to as the Poe of South America and not just for his troubled biography, is practically a poster boy for the Argentinean and Uruguayan literatures of doom: as a toddler, he was present when his father accidentally killed himself with a gunshot blast to the face; while still a teen, Quiroga lost his stepfather to suicide; he had two brothers die young a few years later and--as if things couldn't get any worse--a couple of years after that, he accidentally killed his best friend in another firearm accident; fast forward a decade or so, and Quiroga's first wife checks out of their marriage by suicide; eventually, mortally ill and depressed, the writer finally takes his own life.  Somewhere in between all that death and misfortune, Quiroga found the time to write some of the most no-frills and aesthetically satisfying short stories in the South American canon.  "La gallina degollada," while not my favorite Quiroga by a long shot, still has plenty to recommend it in matters of style.  I'll limit myself to just a few quick observations here since the short story itself is just a click away. From the outset, the narrator is ruthlessly direct and even blunt in the telling of his tale: "Todo el día, sentados en el patio, en un banco estaban los cuatros hijos idiotas del matrimonio Mazzini-Ferraz.  Tenían la lengua entre los labios, los ojos estúpidos, y volvían la cabeza con toda la boca abierta" ["All day long the four idiot sons of the couple Mazzini-Ferraz sat on a bench in the patio.  Their tongues protruded from between their lips; their eyes were dull; their mouths hung open as they turned their heads"] (49 in the Spanish original, 57 in the translation by Margaret Sayers Peden).  Although the "idiot sons," variously described as "las cuatro bestias" ["the four animals"] (52, 60 in the translation), "los cuatro engendros" ["the four misbegotten sons"] (53, 62 in the translation), and even "los monstruos" ["the monsters"] (55, 64 in the translation), certainly don't get cut any slack in their non-PC portrayal as drooling, brain-damaged bumps on a log (on that note, I'd argue that "freaks" or even "abortions" would make for vastly superior translation choices for the Spanish word "engendros" than what Sayers Peden waters down as "misbegotten sons" in the middle quote above), Quiroga turns the table on his uncomfortable readers by asking who is more monstrous: the four meningitis victims "mirando el sol con alegría bestial, como si fuera comida" ["staring at the sun with bestial joy, as if it were something to eat"] (49, 57 in the translation) or the loving parents who fight over who's to blame for having passed on "la aterradora descendencia" ["the terrifying line of descent"] to their progeny (51, 60 in the translation)?  The parents, blessed at last by the birth of a beautiful daughter who makes it to the grand old age of four without showing any signs of having inherited the "idiot" gene of her brothers, then promptly ignore their four firstborn children to shower all their attention and affection on the sane one.  The ending, while telegraphed in advance early on ("Rojo...  Rojo..." ["Red....  Red...."] [55, 63 in the translation]), seems like just about the only one that Quiroga could have settled on, but why take my word for it when--SPOILER ALERT--you could just as easily check out the last two panels of the comic book version of "La gallina degollada" below?  Messed fucking up! 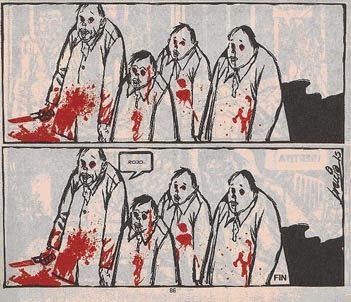