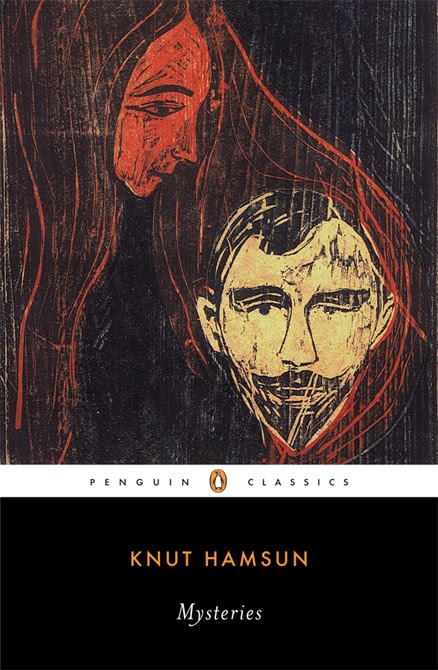 Mysteries, which managed to live up to its name if not exactly its fame for me, my chief complaint being that the novel's unexpectedly dull in between its many authentically certifiable moments, ostensibly concerns the series of "highly unusual events" which takes place one summer in "a small Norwegian coastal town" upon the arrival of a certain Johan Nilsen Nagel (loc 496/6702).  Nagel, "who did a lot of curious things and then disappeared as suddenly as he had come," is a suitably enigmatic person of interest as the wraith-like center of attention in the work both because of the unpredictable things he says and does and because, as early as the first paragraph, the narrator refers to him as "a remarkable, eccentric charlatan" (Ibid.).  What's the purpose of the narrator calling Nagel out in this way?  You tell me.  However, one possible answer for the editorial is that Hamsun intended Mysteries to be an admonition not to look for causality in life or literature in the overly scripted manner practiced by his contemporaries.  After all, what better way to subvert the meaning of a text than to make the reader wonder whether either the narrator or the protagonist not to mention the novelist is to be trusted, to be taken at face value?  Hamsun, who's down on record in a Wikipedia entry with the Nagel-like comment that modern literature should reject realism and naturalism in order to dedicate itself to the "whisper of blood, and the pleading of bone marrow," is similarly hermetic and/or impenetrable throughout much of Mysteries (note: I leave you with a choice between sacred and secular adjective options at no extra charge).  Fortunately, it isn't necessary to understand his intentions in this Rorschach test-in-prose of his to be amused by them.  For example, chapters VIII and XIII both include great, slippery set pieces on the nature and value of literature in which it's not all that easy to see where the criticism ends and the lunacy begins.  In the earlier chapter, Nagel tells Dagny Kielland about an "adventure" he once had which "changes and becomes like a fairy tale" (loc 2350/6702).  The details aren't all that important for our purposes here, at least not in comparison to Nagel's explanation about how fairy tales in India differ from fairy tales in Norway: "On the whole, no one could match the Orientals' ability to hatch colossal delusions, feverish products of bridling brains."  The reason?  "It was all due to the fact that those people lived under a different sun and ate fruit instead of beef" (loc 2441/6702).  Is this all a goof on Nagel's or the narrator's or even Hamsun's part or just the effort of a brain-addled beau to keep a woman interested in him via nonstop chatter?  Whatever the case may be, the increasingly out of sorts Nagel later starts referring to other people as "carnivores" in the sequences before he pulls his vanishing act! (loc 5013/6702).  In the later chapter, a drinking party at Nagel's hotel provides our protagonist with the opportunity to deride Tolstoy as a "preacher" rather than a "thinker," a man no "deeper" than the founder of the Salvation Army in terms of his, ahem, writerly gnosis: "They sell existing products, popularize ready-made ideas," he rails, "vulgarizing them for the masses at bargain prices and causing commotion in the world.  But if you're going to sell, you must do so at a profit.  Tolstoy sells with staggering losses" (loc 3539/6702).  As the evening progresses, Nagel replies to a student's support of Maupassant "in an absurdly hotheaded manner, banging the table, bragging, attacking writers at random" and even "foaming at the mouth."  This may be a not so subtle hint that the character's views when drunk aren't meant to be taken seriously, but you'll note that the mainstream-and-middlebrow insults here are far more rabid and vicious than the ones Tolstoy endured.  Item: "If there appeared a writer, a truly inspired bard with music in his breast, you could be damn sure he would be placed far behind a coarse, prolific professional like Maupassant, a man who had written a lot about love and shown he could turn out book after book!"  Item: "Alfred de Musset, in whose work love was not just a routine of rutting but a delicate, ardent note of spring in his characters, and whose words were positively blazing in line after line--this writer probably didn't have half as many followers as puny Maupassant with his extremely coarse and soulless crotch poetry..." (loc 3712-3726/6702).  Item: A writer named Bjørnson, "a vivid, thunderous presence on our planet," receives drunken, sullen props from Nagel because he doesn't just "sit there like a sphinx before the people, making himself great and mysterious, like Tolstoy on his steppe or Ibsen in his café" (loc 3759/6702).  The point of this proto-Bernhardian insult fest?  I'm not entirely sure.  However, both this chapter and the earlier one demonstrate Hamsun's ability to engage in writing about writing in which little actual "meaning" may be visible to the naked or the monocled eye--in Nagelian ethics parlance, a fine prank on the carnivores! 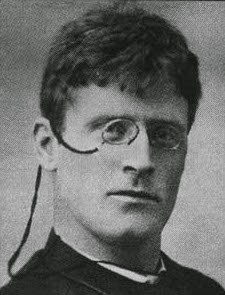 My page number-less Kindle version of Mysteries with the striking cover art was read with Tom's year-long Scandinavian Literature of Doom reading proyecto in mind.  Will link to other posts on the novel besides his and Séamus' below once I find out about them.  In the meantime, some of the more crackpot religious reference variants in Hamsun's text are to be found in Sverre Lyngstad's notes to chapter XX: the chapter where Nagel tells Miniman that "in my heart, I see you as a cowardly, groveling angel of the Lord, with a kind word about everybody and a good deed every day" (loc 5507/6702) because Miniman had emptied out his poison bottle unbeknownst to him.  "I shall rip off your mask and make you betray your true nature; my blood bridles with repugnance every time I see your mendacious blue eyes, and I shrink from you because I feel you have the soul of a counterfeiter," Nagel says at one point (loc 5520/6702).  Lyngstad's footnote explains the substitution of "Jesuit" for "counterfeiter" in another edition of Mysteries.  Later in the chapter, Nagel worries that Miniman's relationship to Miss Gude is a cause for concern: "But in a general sense I may be permitted to feel distressed if you should associate with her and possibly affect her with your sanctimonious depravity" (loc 5536/6702).  Blunt language but maybe not quite as blunt as the anti-Jesuit variant signaled by Lyngstad: "P uses the phrase 'cunning Jesuitry' instead of 'sanctimonious depravity'"!

Amateur Reader (Tom), Wuthering Expectations
I've never heard of anything so insane! - let's get the Knut Hamsun Mysteries readalong moving
Tonight I made a fool out of myself and shocked everyone by my eccentric behavior - Hamsun steals from Dostoevsky
when I get on the subject of my cowbells, I get carried away - Hamsun gets carried away
There are even places where people believe they can attain salvation through cowbells! - mysteries in Mysteries

Pykk, Pykk
not a continuous wave but a storm of interruptions
built in one