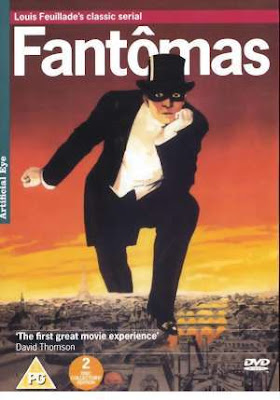 I got a kick out of Allain and Souvestre's first Fantômas novel from 1911, and I absolutely loved Feuillade's Fantômas-inspired serial Les Vampires released later that same decade. But while I'm glad I finally got to see this 1913-14 nitrate about "the genius of crime," I'm sorry to confess that it's almost criminally slow at times. The five serials included here--Fantômas (A l'ombre de la guillotine), Juve contre Fantômas, Le Mort qui tue, Fantômas contre Fantômas, and Le Faux Magistrat--seem to follow the novels fairly faithfully, so part of the problem may be that the only elements of surprise come from the visual rather than the narrative end of things. It also doesn't help that there are no Musidoras slinking around in black bodysuits here, but I won't criticize Feuillade for that psychosexual lapse since he would redeem himself casting-wise in Les Vampires just a few years later. What we do get instead is a cornucopia of costume changes for M. René Navarre in the title role (looking particularly sinister below but often committing his crimes "disguised as a proper bourgeois" as "Fantômas expert" Kim Newman giddily points out in his commentary), a representation of Montmartre as the center of the Parisian underworld (take that, Amélie!), and murder scenes involving "gloves" made out of human skin and a boa constrictor slithering in and out of a bedroom window. Other than that, I don't have much else to add except that l'accent circonflexe is a cruel, cruel invention that should be abolished immediately if not sooner. (http://www.artificial-eye.com/) 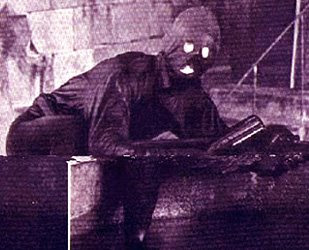 Fantômas: not just your average criminal
P.S. I keep forgetting to mention that my on-again/off-again movie blog, Gambling with Countess Dusy Told, is on again at the moment. For those not offended by a little shameless self-promotion, here are the links to four recent reviews.
Publicadas por Richard a la/s 17:34