I'm not sure that "mother-raper" or the adjectival "mother-raping" are any less offensive than the similar expletives in use today, but those are just two of the colorful linguistic oddities to be found in this gritty police procedural novel set in late 1950s Harlem. #4 in a series featuring tough-talking/acting black police detectives Coffin Ed Johnson and Gravedigger Jones, All Shot Up lives up to its title with virtually non-stop action and what feels like an insider's take on crime, political corruption, and racism in the big city. While this 160-page thrill ride may be a little too high testosterone for the Jane Austen crowd, Himes does a great job at keeping the narrative roller coaster twisting and turning. In addition, he has a flair for description that's simultaneously funny and arresting: "It was ten minutes by foot, if you were on your way to church," he writes of one destination, "about two and a half minutes if your old lady was chasing you with a razor" (p. 21). This sort of mordant, streetwise sense of humor permeates the novel, a fine thing since the almost surrealistically violent caper at its heart is studded with lots of sordid characters who don't really represent Harlem's more churchgoing sides of the population. All in all, a very enjoyable read--but somebody else will have to fill me in on how closely Himes' imagined Harlem, so vividly portrayed by a U.S. expat then living in France, matched the real deal city at the time. (Pegasus Books/45 Wall Street, Suite 1021/New York, NY 10005) 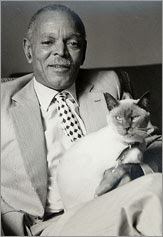 For a nice little bio piece/book review having to do with Chester Himes, check out Courttia Newland's 2000 "From a life of crime to watching the detectives" here.
Publicadas por Richard a la/s 13:36