That 1001 Books You Must Read Before You Die list sure has a lot of outright dogs on it, kind reader, but I'll spare you a sermon on it tonight since it also includes this 1800-year old classic about a man turned into a donkey. Although anyone interested in the history of the novel should certainly read Apuleius at some point in time just because, suffice it to say that his The Golden Ass (a/k/a The Metamorphoses, here translated with verve by the University of Cambridge's E.J. Kenney) isn't the sort of boring fiction that's been popularized by today's writers. Bestiality, murder, and witchcraft all play a big role in the comic proceedings that plague poor narrator Lucius after he's been transformed into an ass and abused by one unsavory owner after another, and the work's gleeful mix of high and low humor and freewheeling use of a frame narrative will seem completely unrestrained to anyone conditioned by literary fiction's current vogue for precious and tweedy prose. While I don't know enough about second century mystery cults to hazard a guess as to whether Lucius' final metamorphosis from an ass into an initiate of Isis is as spiritually significant as some scholars would have it, I do know enough about the modern novel to wish we had more Golden Asses and Satyricons and fewer Paul Auster and Ian McEwan titles. A pagan classic! (http://www.penguinclassics.com/) 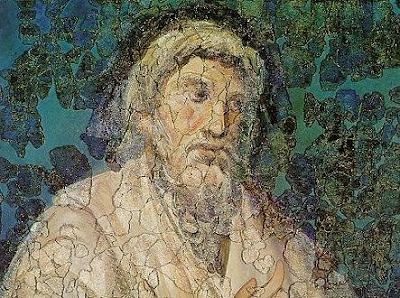 Apuleius: not just another dead guy on a painted ceiling tile.
Publicadas por Richard a la/s 20:10