Moby-Dick; or, The Whale 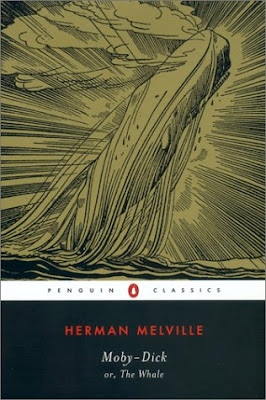 For every loser who's ever complained that Moby-Dick is boring or "too long," let me make it clear that I wish Melville had added another 625 pages to his much-beloved and maybe equally-derided classic.  Deal with it.  Whether you consider Moby-Dick a grandiose adventure yarn, an epic tale of obsession and revenge, a political or spiritual allegory, or even what some have anointed as "the American bible," count me in among the legions of fans who can attest that's it all of that and more.  So what makes the tale of the death ship the Pequod so fascinating?  For me, it all begins and ends with Melville's prose.  While it's hard to explain how he manages to pull this off in a whaling chronicle that must have passed for state of the art realism in the year of its publication, suffice it to say that it's easy to see why the King James Bible and Shakespeare are the usual frames of reference when talking about the elevated intensity of Melville's language.  Truly remarkable stuff.  On a related note, I should add that I probably marked more passages per square page to return to here than in almost any other book I've read in recent memory.  Wonderful images and similes in abundance!  And despite the way in which Ahab's monomaniacal quest for the white whale has taken on somewhat caricaturish proportions in popular culture, rest assured that Melville's language arts are put into the service of some truly powerful storytelling.  While there are humorous moments aplenty to be sure, I think what I'll most remember from the two and a half weeks I spent sailing with the Pequod's crew is the rare pleasure of getting to see Melville as heavyweight prize fighter taking on death and mortality, civilization vs. nature, and the meaning of it all for 15 rounds of unflinching, toe to toe action.  Maybe not the best book to recommend to some of your lightweight, meme-obsessed blogger friends but an enormously satisfying read nonetheless.  (http://www.penguinclassics.com/)


Herman Melville, 1861
Melville 101
Not having read any Melville since my undergrad days and possibly even since my high school days, this month's long-delayed Moby-Dick encounter has made me positively giddy at the thought of acquainting myself with his other writing, his critical reception, etc.  Already have his Complete Shorter Fiction (Everyman's Library, 1997) and a recent biography, Andrew Delbanco's Melville: His World and Works (Alfred A. Knopf, 2005), out on loan from the library.  In the meantime, here are three style samples from the beginning, the middle, and near the end of Moby-Dick to give you an idea of the kind of things that make me want to undertake a reread of it down the road.
Call me Ishmael.  Some years ago--never mind how long precisely--having little or no money in my purse, and nothing particular to interest me on shore, I thought I would sail about a little and see the watery part of the world.  It is a way I have of driving off the spleen, and regulating the circulation.  Whenever I find myself growing grim about the mouth; whenever it is a damp, drizzly November in my soul; whenever I find myself involuntarily pausing before coffin warehouses, and bringing up the rear of every funeral I meet; and especially whenever my hypos get such an upper hand of me, that it requires a strong moral principle to prevent me from deliberately stepping into the street, and methodically knocking people's hats off--then, I account it high time to get to sea as soon as I can.  This is my substitute for pistol and ball.  With a philosophical flourish Cato throws himself upon his sword; I quietly take to the ship.  There is nothing surprising in this.  If they but knew it, almost all men in their degree, some time or another, cherish very nearly the same feelings toward the ocean with me.
Again: as the profound calm which only apparently precedes and prophesies of the storm, is perhaps more awful than the storm itself; for, indeed, the calm is but the wrapper and envelope of the storm; and contains it in itself, as the seemingly harmless rifle holds, the fatal power, and the ball, and the explosion; so the graceful repose of the line, as it silently serpentines about the oarsmen before being brought into actual play--this is a thing which carries more of true terror than any other aspect of this dangerous affair.  But why say more?  All men live enveloped in whale-lines.  All are born with halters round their necks; but it is only when caught in the swift, sudden turn of death, that mortals realize the silent, subtle, ever-present perils of life.  And if you be a philosopher, though seated in the whale-boat, you would not at heart feel one whit more of terror, than though seated before your evening fire with a poker, and not a harpoon, by your side.
"Starbuck, of late I've felt strongly moved to thee; ever since that hour we both saw--thou know'st what, in one another's eyes.  But in this matter of the whale, be the front of thy face to me as the palm of this hand--a lipless, unfeatured blank.  Ahab is for ever Ahab, man.  This whole act's immutably decreed.  'Twas rehearsed by thee and me a billion years before this ocean rolled.  Fool!  I am the Fates' lieutenant; I act under orders.  Look thou, underling!  that thou obeyst mine.  --Stand round me, men.  Ye see an old man cut down to the stump; leaning on a shivered lance; propped up on a lonely foot.  'Tis Ahab--his body's part; but Ahab's soul's a centipede, that moves upon a hundred legs.  I feel strained, half stranded, as ropes that tow dismasted frigates in a gale; and I may look so.  But ere I break, ye'll hear me crack; and till ye hear that, know that Ahab's hawser tows his purpose yet.  Believe ye, men, in the things called omens?  Then laugh aloud, and cry encore!  For ere they drown, drowning things will twice rise to the surface; then rise again, to sink for evermore.  So with Moby Dick--two days he's floated--to-morrow will be the third.  Aye, men, he'll rise once more,--but only to spout his last!  D'ye feel brave, men, brave?"
The famous first paragraph (3), a snippet of Ishmael's philosophy (306), and a rousing speech from Captain Ahab that gives me the chills whenever I think of the line, "but Ahab's soul's a centipede" (611).  Note that while Ishmael's a wonderful narrator, simultaneously down to earth and of an engagingly philosophical bent, he's a little more slippery than he appears to be at first.  At the very least, it takes him a while to admit that the same sea that he professes to love will soon turn into a watery graveyard for man and beasts alike.  As for the captain's speech, I think it was Andrew Delbanco who pointed out that Ahab gets the same treatment from Melville that Satan got from Milton in Paradise Lost: some of the best lines, the most memorable close-ups, an at times sympathethic portrayal despite his manifest flaws.  These types of complexities, in combination with the Calvinistic touches suggesting we're all doomed from the start, leave me with a parting question for anybody who's bothered to read this far down in the post: Hast ye seen the white whale?
Publicadas por Richard a la/s 17:01