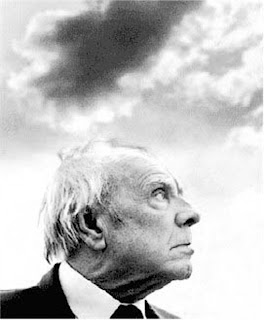 
"If you look at theology or philosophy as fantastic literature, you'll see that they are much more ambitious than poetry."  --Borges in an interview from 1984
I guess I should start by admitting that I tend to prefer humorous Borges to cosmological Borges.  I'm also not that big a fan of "The Library of Babel" from an entertainment standpoint.  For me, the payoff is much more on the conceptual side of things if that makes any sense.  To help explain all this, I should note that this story (for me, one of the most enigmatic and challenging of all Borges' signature pieces) is striking for the amount of cosmic angst and striving for the infinite contained within its slender confines.  An unnamed narrator begins by telling us that the universe is a Library "composed of an indefinite and perhaps infinite number of hexagonal galleries" filled with every type of book imaginable (51).  While describing his vaguely otherworldly surroundings with an almost mathematical precision, the narrator also owns up to the difficulties faced by "man, the imperfect librarian" (52) in his attempts to impose order on this chaos of bookly and geometrical riches.  We learn, for example, that the Library houses both magical texts that can predict the future and explain the past and any number of false texts written to counter such prophetic revelations.  Not surprisingly given the title of the work, there are kabbalistic digressions on the value of letters and numbers and the spaces between characters in written languages.  To avoid leaving you with a banal summary of what's a very abstruse tale, I'll get ready to close by saying that the narrator's allusions to seekers and suicides hints at a Tarkovsky-like sense of metaphysical disquiet that hovers over the search for truth and meaning within the Library's archives.  To add to the sense that something just isn't quite right, it also becomes apparent that the "editor" responsible for the footnotes isn't the same person as the one who's been narrating the tale.  What kind of a text are we reading anyway?  And how old is it?  While "The Library of Babel" is way less than a fave for me as a diversion, I think I appreciate its speculative side more the more I think of Borges approaching mathematics, philosophy, and theology as so many branches of the fantastic literature family tree.  Now there's a concept I can wrap my mind around!
Alberto Manguel has a fine piece on "The Library of Babel" here.  He's also way less conflicted about the story than I am.