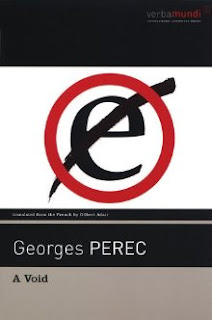 While I'm sure you're all super busy with various end of the year reading projects and whatnot, I hope I can entice a few of you to join assorted other rabid Georges Perec fans and me in a shared read of his 1969 novel A Void later this month.  A Void, originally published as La disparition in France way back when, is sometimes described as a "metaphysical whodunit" that's either a venture into noir or a parody of the same; however, many of you will know of it instead as that circa 300-page novel somehow written without the use of the letter "e."  Sound a little too experimental for you?  Not to worry.  First, take a look at the snapshot of author and cat below: Perec might have been a genius, but he was one of those fun-loving geniuses if you catch my drift.  Next, take a look at some of the write-ups from the shared read of Perec's Life A User's Manual that a bunch of us undertook in April.  To a person, wildly ecstatic raves.  While I can't promise you that A Void will be anywhere near as vachement formidable as Life A User's Manual, this Wikipedia entry here makes me think that it should be every bit as satisfying to you, the discriminating reader, as Mockingjay and Tender Morsels seem to be to less discriminating readers.  Are you in? 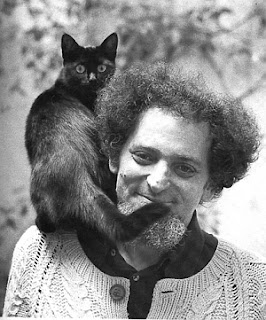 Georges Perec, l'homme de l'heure
When
To give everybody time to read and then post at their leisure, "discussions" are targeted to take place on participating blogs somewhere between October 29th (a Friday) and November 7th (a Sunday): in other words, two full weekends.  Post whenever you like, though.
Who﻿ else is in or probably in
Bellezza (Dolce Bellezza)
Claire (kiss a cloud)
E.L. Fay (This Book and I Could Be Friends)
Frances (Nonsuch Book)
Isabella (Magnificent Octopus)
Sarah (what we have here is a failure to communicate)
Publicadas por Richard a la/s 01:34