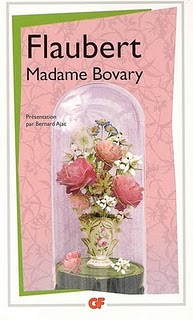 "Madame Bovary itself neither praises adultery in order to condemn marriage nor attacks adultery in order to defend marriage.  It creates instead a drastically unstable social and ethical universe in which as fundamental an opposition as that between adultery and marriage threatens to become a distinction without a difference.  Emma's real tragedy is that little of substance differentiates her husband from her lovers, her ordinary reality from her imagined one.  Seeming opposites become deadly repetitions of one another, and the despised husband seems in the end to be the only one who loves her.  Not only does he keep an adoring vigil at her coffin while others sleep or are absent; he ends his life imitating hers as he establishes Emma as an undefiled romantic idol despite all evidence to the contrary."  --Dominick LaCapra, "Two Trials," 729, in Denis Hollier, ed., A New History of French Literature (Cambridge: Harvard University Press, 2001).

True story.  I was so shaken when I finished Madame Bovary the other night that I almost immediately e-mailed Frances thanking her for recommending the book but warning her that I might not have my emotions in check in time for this post.  A slight exaggeration, of course, but really, what a stupendous read!  In any event, the Dominick LaCapra quotation above (part of a short but incisive article dealing with the twin obscenity trials brought against Flaubert and Baudelaire in 1857) calmly touches on a couple of things I thought were key to the novel's success.  First, there's that whole business about the "unstable social and ethical universe" created by Flaubert.  This, in conjunction with a lack of moralizing in the novel, made the characterizations feel richer, more unpredictable, more lifelike to me.  Secondly, I think LaCapra is right on target in pointing out that the "real tragedy" in Madame Bovary isn't the fact that Emma feels trapped in an unfulfilling marriage but that Charles--for all his flaws as the despised husband--is also the one "true" love in Emma's life.  At the very least, this notion, just as much as the disturbing scene where the title character calmly ingests a mouthful of arsenic to achieve peace with the universe, is one of the things that really, really got to me as the novel wound down to its unforgiving end. 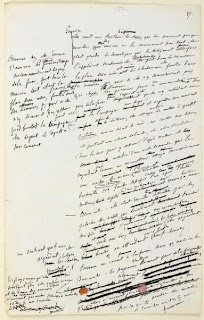 Madame Bovary rough draft
The unique qualities of Flaubert's EpiPen style prose and storytelling notwithstanding, I'm not sure he could have gotten under my skin with such a misanthropic tale about adultery and unrequited love on technique alone.  I think I finally sensed a hint of the soul behind the ruthless wordsmith.  That having been said, there's no denying that the writing did another number on me here.  I loved, for example, how the "moral" instability alluded to above also extended to the style of writing itself--for, like the scenes late in Part II where Emma's imagination or POV seemed to either merge with or actively be at war with nature by turns, the one in III, 8 where she's leaving Rodolphe's estate after he's rejected her plea for financial assistance seems to go beyond mere "realism":

It seemed to her suddenly that little flame-colored globes were exploding in the air like bullets bursting and flattening, and spinning over and over, then melting on the snow, among the branches of the trees.  In the center of each, Rodolphe's face appeared.  They were multiplying, coming together, penetrating her; everything vanished.  She recognized the lights of the houses, shining from a distance through the mist" (Lydia Davis' translation, 278).]

In addition to these wonderful set-pieces, I was also impressed by Flaubert's often biting use of one-liners for dramatic "miniaturizations" and Tacitean summations of character.  Three in particular struck a chord with me:  "Ce furent trois jours pleins, exquis, splendides, une vraie lune de miel" ["They were three full, exquisite, splendid, days, a real honeymoon"] we read in III, 3, on the subject of one of Emma's and Léon's adulterous trysts (328 in Flaubert, 227 in Davis); "Mais le dénigrement de ceux que nous aimons toujours nous en détache quelque peu.  Il ne faut pas toucher aux idoles: la dorure en reste aux mains" ["But vilifying those we love always detaches us from them a little.  We should not touch our idols: their gilding will remain on our hands"], we're warned in III, 6, after a lovers' quarrel (355, 250 in Davis); "Et il la regardait avec des yeux d'une tendresse comme elle n'en avait jamais vu" ["And he looked at her with a love in his eyes that she had never seen before"], we read in III, 8, finally encountering a scene where Charles is at last appreciated in a way by his spouse--on her deathbed (391, 281 in Davis).  Whilst I'm still not entirely sure what Flaubert's treatment of his characters reveals about his worldview as a person, I have to say that this quintessentially depressing novel of his maintained my interest down to the very last line (itself a master stroke of bleakness, by the way).  Génial!  (http://www.editions.flammarion.com/) 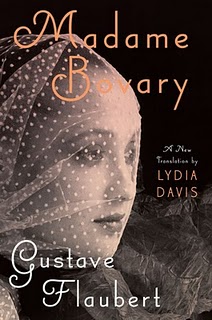