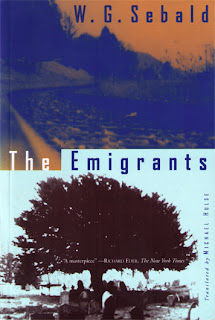 
"Emigrants, as is well known, tend to seek out their own kind."
(The Emigrants, 67)﻿
At the risk of alienating two to three of my four to five regular readers, I have to admit that I wasn't blown away by my first encounter with Sebald.  Not entirely anyway.  I enjoyed The Emigrants, I admired certain aspects of it tremendously, and yet something about the novelist's distant tone just didn't connect with me.  Is it fair for a reader to criticize an author for the lack of chemistry between the two of them?  While I try and figure out a better way to say what I mean, let's start with the basics: The Emigrants is a series of four apparently straightforward emigrant narratives loosely connected by an unnamed narrator, a Nabokovian butterfly collector, and the shadow of the Shoah.  At once a meditation on memory and a disquisition on just how troublesome some memories can be, it's written as a species of fictive memoir by a first-person narrator who may or may not be intended to stand in for Sebald himself.  While these rescued stories are liberally punctuated with black and white photographs that lend the work the documentary feel of a family album, there are enough references to faux-documentary German cinema (Fritz Lang's Dr. Mabuse, the Gambler and Werner Herzog's The Enigma of Kaspar Hauser), the dream world, madness, and memory-related trauma invoked to remind you that the narrative's carefully-crafted "reality" isn't quite the same as yours and mine.  That being said, one of the more startling things about the novel is how effectively it riffs on that sense of temporal dislocation and loss.  For while the stories about The Emigrants' four main characters certainly seem to evoke the harsh realities lived by untold millions of displaced 20th-century men and women, the narrator himself seems happy to populate his work with both the living and the dead--the recurring image of a Nabokovian butterfly collector and Nabokov's own autobiographical Speak, Memory being the intertextual totems of choice.  More a near-masterpiece than a masterpiece to me given my occasional disconnect with the authorial voice, this lyrical, provocative, and yet oddly dispassionate effort still has me intrigued about reading much more Sebald down the road.  (http://www.ndpublishing.com/) 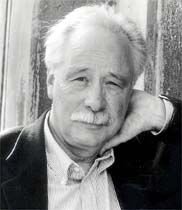 W.G. Sebald
"The rest of the time I was looking for Cosmo and Ambros night and day.  Now and then I thought I saw them disappear into an entry or a lift or turn a street corner.  Or else I really did see them, taking tea out in the courtyard, or in the hall leafing through the latest papers, which were brought early every morning at breakneck speed from Paris to Deauville by Gabriel the chauffeur.  They were silent, as the dead usually are when they appear in our dreams, and seemed somewhat downcast and dejected.  Generally, in fact, they behaved as if their altered condition, so to speak, were a terrible family secret not to be revealed under any circumstances.  If I approached them, they dissolved before my very eyes, leaving behind them nothing but the vacant space they had occupied.  Whenever I caught sight of them, I contented myself with observing them from a distance.  Wherever I happened upon them it was as if they constituted a point of stillness in the ceaseless bustle."
(The Emigrants [translated by Michael Hulse], 122-123)﻿
Publicadas por Richard a la/s 01:22