Vegetarian or not, it's easy enough to get grossed out by Esteban Echeverría's "El matadero" ["The Slaughterhouse," written c. 1840 and published posthumously in 1871].  Buenos Aires in the 1830s.  During the course of over a fortnight without beef accompanied by the quasi-surf and turf double whammy of a flood of almost biblical proportions served up to area residents at the same pestilential time, the state of hunger in the city is such that even the thousands of rats who normally survive off the scraps of the cattle slaughtering trade "todos murieron o de hambre o ahogados en sus cuevas por la incesante lluvia" ["all died either of hunger or were drowned in their holes by the incessant rain"] (26 in the Spanish original, 6 in John Incledon's translation).  To prevent the human inhabitants of the future metropolis from suffering the same inhuman fate, an emergency shipment of some 50 steer is sent to the slaughterhouse at the south of the city in order to tide people over.  The good news proclaimed by the start of the slaughter is greeted by the desperate behavior of scavengers who hide globs of fat in between their "tetas" ["tits"] (31, 10 in the translation) or in their pants to sneak away with free goodies, kids arguing at knife point over delicious offal freshly stolen from the butcher, and--in a culmination of the raw civilization and barbarism style "visceral realism" all too freely practiced by the narrator up to this point--a young boy is suddenly (and graphically) decapitated when a wild bull breaks free.  The "lingering" description of the decapitation scene, in reality all of only one sentence long, almost made me as queasy as if I were watching Oldboy on a first date with a shy church girl.  OK, with that farfetched analogy now fortunately behind us, I suppose that now is as good a time as any to let on that the descriptive excesses of "El matadero" provide a sort of covering fire for Echeverría's real aim in the story: to attack the regime of the caudillo Juan Manuel de Rosas and the local church authorities that backed his dictatorship.  Although I suspect that the mere mention of the 19th century hostilities between the unitarios (Unitarians) and the federales (Federalists) in Argentina may drive everybody but your humble servant into a mad stampede for the exits, I'm going to risk it here because the unnamed narrator of Echeverría's story himself draws attention to the Sarmiento-like belief that the spectacle of the violent anarchy on display at the slaughterhouse was "animado y pintoresco, aunque reunía todo lo horriblemente feo, inmundo y deforme de una pequeña clase proletaria peculiar del Río de la Plata" ["lively and picturesque, even though it brought together all the horrible ugliness, filth, and deformity of a small proletarian class peculiar to the Río de la Plata region"] (28 in the original, 8 in the translation).  Or more succinctly, a "simulacro en pequeño...éste del modo bárbaro con que se ventilan en nuestro país las cuestiones y los derechos individuales y sociales" ["miniature version of the barbaric way individual and social issues and rights are aired in our country"] (32, 11 in the translation).  While "El matadero"'s social commentary is heavyhanded it is rarely dull and, even at a remove of approximately 175 years from the time of its writing, it still strikes me as an undeniably audacious work in terms of its style--in particular its attempt to replicate the day to day colloquial speech of that "small proletarian class peculiar to the Río de la Plata region" that Echeverría looked down on--in terms of its occasionally humorous tone, and in terms of the hyper violence with which it punctuates its themes: at the conclusion of the story, for example, a young man is stripped nude by a mob, tied face down to a table, and threatened with sodomy or torture by butcher's shears.  As an added bonus for Argentinophile readers, this story serves up one final, uncomfortably ironic historical/fiction treat: testimony of an Afro-Argentine presence in 1830s Buenos Aires that's nowhere to be found in today's modern city. 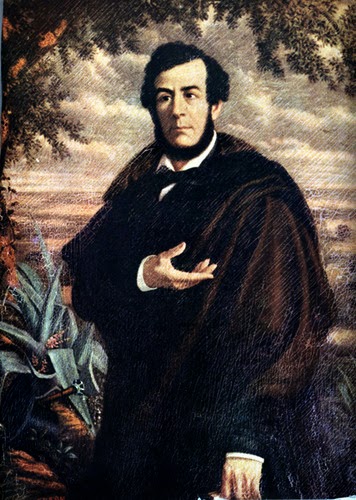 Source
Echeverría's "El Matadero" (spelled with a capital "M" here but almost nowhere else for some reason) is the lead-off story in El terror argentino: cuentos curated by Elvio E. Gandolfo and Eduardo Hojman (Buenos Aires: Alfaguara, 2002, 19-43).  The English translations in the body of the post above come from John Incledon's translation of "The Slaughterhouse" available in Seymour Menton's The Spanish American Short Story: A Critical Anthology (Berkeley and Los Angeles: University of California Press, 1980, 3-22).  A comic book adaptation of the work with a particularly insightful introduction by Ricardo Piglia ("Echeverría y el lugar de la ficción," pp. 8-10) plus the artwork of Enrique Breccia ("Esteban Echeverría, El matadero," pp. 11-19) can be found in Piglia's La Argentina en pedazos that was mentioned in the previous post (Buenos Aires: Ediciones de la Urraca, 1993).  Breccia's slaughterhouse image above is from the first frame of his mini comic book.
If the Facundo.  Civilización y barbarie-like description of "El matadero"'s "relato de la violencia política local, puesta en escena de la permanente lucha entre civilización y barbarie" ["account of local political violence (and) staging of the permanent conflict between civiliaztion and barbarism"] seems to make it a curious choice for a short story anthology dedicated to works of "terror," note that Gandolfo and Hojman are quick to explain that one character's "muy concreta amenaza de violación a manos de los carniceros" ["very concrete threat of rape at the hands of the butchers"], the blood which flows "incesante y terrorífica" ["incessantly and frighteningly"] throughout the story, and "la muerte casual, gráfica y atroz de un niño" ["the casual, graphic, and dreadful death of a child"] convert it into "un auténtico cuento de terror colectivo" ["an authentic short story about collective terror"] (22).  More on the links between "El matadero" and Facundo coming soon.  In the meantime, our friend Tom at Wuthering Expectations has a standout post on "El matadero" and the origins of the Argentinean Literature of Doom here & the Incledon translation of "The Slaughterhouse" can be accessed through Google Books online here.
Publicadas por Richard a la/s 03:55