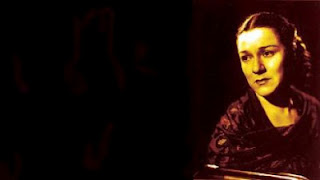 Since July has been one annoyingly hot day after another and the computer is in the hottest room in the house and the margarita I had after work has been threatening to put me to sleep for hours now, I'm going to talk about a two-page short story tonight rather than anything more complicated.  However, what a fine, austere piece of writing I have to share with you.  "Los 30-30," like the rest of the works in Campobello's 1931 novella/short story collection Cartucho, is set in Chihuahua during the Mexican Revolution and is supposedly based on events Campobello (1900-1986) either heard of or witnessed in her childhood up north in Pancho Villa territory.  In this piece, Gerardo Ruiz, "elegante, nervioso, con sonrisa estudiada" ["elegant, nervous, with a studied smile"], finds out he's about to be executed for something he claims is a mere misunderstanding.  When he receives the news, Ruiz becomes infuriated and lashes out at his captors for what seems like a full two hours: "Yo soy un caballero y no puedo morir como un ladrón...  ¡Bestias salvajes, bandidos, bandidos!" ["I'm a gentleman, and I can't die like a thief...  Savages! Bandits!  Bandits!"].  The general in charge lets Ruiz rant on until he's spent and then reissues the execution command now that the prisoner "ha desahogado su cólera" ["has vented his anger"].  Ruiz eventually takes sixteen bullets from the firing squad but somehow manages to survive the initial volley.  The coup de grâce then comes from a 30-30 rifle, which takes an ear off of the gentleman and leaves a pool of blood on the ground.  Campobello describes the scene with a calm but knowing detachment that seems to suggest that these sort of impromptu wartime executions were all too common: "La sangre era negra, negra  --dijeron los soldados que porque había muerto muy enojado--.  Mucha gente vio este fusilamiento, era el mediodía.  Mamá presenció todo" ["'The blood was black, really black,' said the soldiers, 'because he had died so angry.'  Many people saw this shooting, it took place at noon.  Mom witnessed all of it"].


The entirety of Cartucho is included in the 1960 Campobello collection Mis libros and, amazingly enough, is also available in English as Cartucho and My Mother's Hands as translated by Irene Matthews and Doris Meyer for the Texas Pan American Series.  To prove what a small world it is, the 1931 edition of Cartucho was edited with the assistance of ex-Stridentist Germán List Arzubide, last mentioned on the blog here in connection with a post about an interview he did with the young Roberto Bolaño in 1976.
Publicadas por Richard a la/s 23:57