Bad Nature, or With Elvis in Mexico

Bad Nature, or With Elvis in Mexico (New Directions, 2010)
by Javier Marías [translated from the Spanish by Esther Allen]
Spain, 1998

It prob. wouldn't have felt like a real Spanish Lit Month to me without a Javier Marías work or two to talk about, and although I eventually decided to pass on pre-tournament favorites Negra espalda del tiempo [Dark Back of Time] and Los enamoramientos for sheer lack of time, the 57-page Bad Nature, or With Elvis in Mexico [original title: Mala índole] wasn't a bad consolation prize at all.  In fact, I laughed my way through most of this quick, amusing read even though I, uh, kind of felt like I was cheating on Marías by reading him in English.  In any event, the set-up of Bad Nature is as follows: contrary to the official story passed down by history to the effect that the King never actually set foot in Mexico while shooting all of Fun in Acapulco from a Hollywood soundstage, Elvis fan and Madrid native Ruibérriz de Torres (real first name unknown but presumably the very same ghostwriter Ruibérriz who figured in Marías' 1994 Mañana en la batalla piensa en mí) narrates a story dating back to the time he was in Mexico accompanying "EP" on the set of this very same movie.  Through a series of translation-based misunderstandings and a choice but maybe poorly-timed insult from Elvis himself, poor Ruibérriz--or Roy Berry as the Spanish-challenged gringos in Elvis' inner circle take to calling him--finds himself being hunted down by a pack of Mexican thugs who aren't particularly fond of the fast-talking Spaniard's "European accent" (43).  Marías, who probably isn't appreciated enough for his comedic chops, is in particularly fine form here: "'Oh, no, please, what will his father think,' Ruibérriz wonders as the man he calls Mr. Presley "perpetrated 'And the Bullfighter Was a Lady' wearing some approximation of a Mexican rancher's garb and swirling a bullfighter's cape over his carefully coiffed head or throwing it around his shoulders with the yellow side up as if it were a cloak."  And a moment later: "'Oh, no, that's going too far, that's regicide,' I thought when I read in the screenplay that in the final scene Presley was to sing 'Guadalajara,' in Spanish, at the edge of a cliff, cheered on insincerely by all the mariachis together.  But that's another story, and the linguistic disaster was no fault of mine" (19-20).  In other words, atypical Marías but--as far as I know--the best Elvis- or El Vez- or even "Mucho, Elvis"-related tale yet to make an appearance during Spanish Lit Month.  It's a hit! (New Directions) 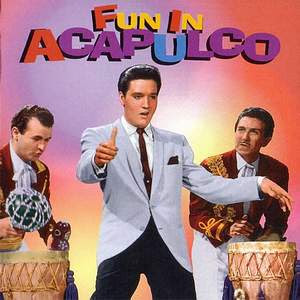