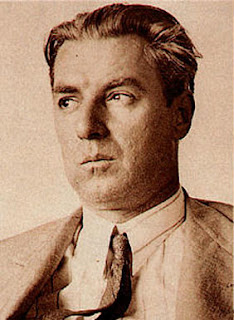 Arlt, "our Dostoevsky" according to some argentinos and a guy who couldn't write his way out of a paper bag according to some effete others, can be introduced to Spanish Lit Month readers here, much more dispassionately, as the man who hit the degenerate trifecta in 1926, 1929 and 1931 with his crude, street smart jackpots El juguete rabioso [Mad Toy], Los siete locos [The Seven Madmen], and Los lanzallamas--all recommended.  "Ester Primavera" ["Esther Primavera," unavailable in English as far as I'm aware] is one of the better short stories I've read by him to date, by which I mean that most other book bloggers would probably hate the work.  You, on the other hand, you just might like it.  A character study of a Buenos Aires underworld type spending his last days in a tuberculosis sanatorium far away from the great metropolis somewhere out in the mountains, the story finds the narrator obsessing over the essentially unprovoked horrible wrong he once perpetrated on the young Ester Primavera.  In typically uncomfortable Arlt fashion, the narrator isn't really apologetic for ruining the title character's life but he can't seem to get her out of his thoughts either.  While Arlt plays with some more or less conventional contrasts between the dying lowlife in the mountain retreat and the innocent young woman in the big city, what really makes the story work from a strictly storytelling point of view is the unconventional delight he takes in underscoring the parallels between the physical and the psychological sickness of the narrator and his criminal companions.  After a scene in which one character smiles happily because he has just had a prolonged coughing fit but can find no signs of blood on his handkerchief, for example, the narrator dryly notes, "Ésa es la obsesión nuestra.  Y siempre nos consultamos" ["That's our obsession.  And we always consult each other"] (313).  Two paragraphs later, the reader will discover what "Physician, heal thyself" means to Arlt's doomed lungers in what I think is probably as optimistic a note as any to close on:

[We even place bets, yes, bets, on the people who are dying in the wards.  Cigarette packs are wagered to see who can guess the hour of death of somebody who's in agony.  A complicated and terrible game because sometimes the dying person doesn't die but instead "reacts," enters into convalescence, rids himself of the illness, and in turn begins to make fun of the gamblers and to work himself up to the point of ironically seeking out another "candidate" to place a bet on.] 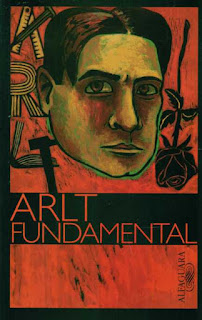 Source
"Esther Primavera" can be found in El jorobadito, a 1933 short story collection by Arlt.  However, I read the story in Arlt fundamental (Buenos Aires: Alfaguara, 2010, 303-317), which has selected writings chosen by Analía Capdevila and edited with a prologue and notes by Ana Silvia Galán, in part because I love that cover!

Three snazzy Arlt-related posts written by Amateur Reader (Tom) over at Wuthering Expectations
"Roaming the city by guess and by God - Roberto Arlt and Mad Toy"
"Even so, it cannot have been good for his health - I marvel at Argentinean literature"
"We're discoverers who have only a vague idea of the direction we're heading in - Restless writers"
Publicadas por Richard a la/s 23:57