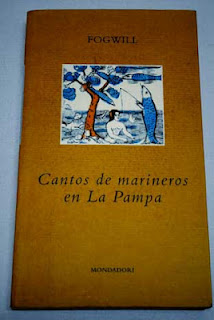 If I remember the story correctly, the then 41-year old Fogwill supposedly wrote all of Los pichiciegos [The Pichiciegos; available in English under the artificially fabricated and hence completely idiotic title of Malvinas Requiem] in Buenos Aires in 1982 during the two months of that year that la Guerra de las Malvinas a/k/a the Falklands War took place--a war that saw nearly 1,000 people lose their lives over land that could only be loved by sheep.  Legend has it that early manuscript copies of the work circulated by hand among the author's friends until the departure of the military government in the following year made it safe to publish the work without fear of reprisals.  In any event, you, the intrepid Spanish Lit Month reader, can now enjoy Los pichiciegos in the privacy of your own home and in one or both of the two bellicose languages to boot--great news since Fogwill somehow managed to turn this punch in the mouth of Argentine nationalism into one of my personal faves in all of recent Spanish-language literature.  How, exactly, did he do it?  To try and answer that, I should probably begin by noting that the titular pichiciegos, named after a rare breed of blind mini-armadillo found in Argentina's wine country whose most famous attribute is said to be its ability to burrow underground and live unseen by man, are a small band of deserters trying to ride out the remainder of the war while trapped in the dangerous no man's land between Argentinean and British lines.  Since survival is the only form of "victory" that matters to these human pichiciegos, they spend most of their time underground digging, expanding their storehouse of food, water, and cigarettes, fantasizing about what they'll do if they ever make it out alive, and occasionally trading information to the British troops in exchange for food, batteries, and other essential supplies while waiting for the war to hurry up and end.  I suspect that the speed with which Fogwill wrote Los pichiciegos may account for some of the 121-page novel's considerable energy.  However, he also makes it easy for the reader to identify with his none too heroic cast of characters both because of the conversational tone and the humor of the narrative but also on account of a rare knack he has for being able to shift from the horrors of war to the often comic camaraderie among the men without missing a beat.  You'd probably have to read this for yourself to understand why one scene of a pichiciego cheering on a British bombing run against non-pichiciego Argentine troops or another scene of a British Sea Harrier playing mind games with a lone pichiciego who has been caught out in the open and is too paralyzed to move remain indeliby etched on my mind, but in the meantime here's a good short example of Fogwill getting at the futility of this particular war with his typical sense of humor.  The set-up: a few pichiciegos have just gotten ahold of a British newspaper which, once translated, reveals the uncomfortable truth that the British are just as uncertain about how the war will end as the Argentineans are (282):

["They don't know what's happening nor what's going to happen!" Viterbo was saying.
"And what would you like to see happen?"
"That Argentina wins."
"And you're going to jail!"
"What do I know?  You?"
"I'd like them to make a peace treaty and stop fucking around."
"You?"
"That they make a peace treaty, so we can return."
"You?"
"That they win, that they execute everybody, and that they take us back to Buenos Aires by plane."
A Buenos Aires guy's idea.] 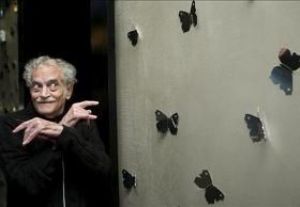 Los pichiegos is available separately or as part of the Cantos de marineros en La Pampa anthology, which is where I read it (Barcelona: Mondadori, 1998, 229-350).  Fogwill's as yet untranslated "Muchacha punk" is one of the best short stories I've ever read, so the next thing I read by this famous wacko is sure to be a massive letdown.  I'm OK with that for now.