The Song of the Cid: Canto One 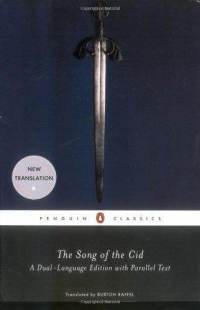 The Song of the Cid: A Dual-Language Edition with Parallel Text (Penguin Classics, 2009)
by Anonymous [translated from the Spanish by Burton Raffel]
Castile, c. 1200

While well aware that the use of any two of the three words "medieval," "Spanish," and "poetry" in combination is a surefire way to drive readers away from the blog, I've knowingly but rather passive-aggressively decided to dedicate at least three posts this month to my reread of one of the greatest works in all of medieval Spanish poetry: the anonymous Cantar de Mio Cid, now available as The Song of the Cid in a newish dual language Penguin translation by Burton Raffel.  Canto One, the focus for today, may surprise those of you who only know the cantar de gesta [chanson de geste] tradition from the French side of the border.  Although there's no shortage of epic bloodletting or battles pitting Christians against Moors here, for example, the tone of the poem is more realistic/less fantastic than the Chanson de Roland both in its battle scenes and its nuanced portrayal of the Cid's non-Christian opponents.  The poem begins with Rodrigo Díaz de Vivar, the historic figure also known as the Cid (from the Arabic honorifics sayyid or sayyidi, "lord" or "my lord"], about to be exiled from Castile on account of some unspecified slight he falsely has been accused of committing against King Alfonso VI.  The Cid and his men are given nine days to say goodbye to their families and to exit the land, and once they do they have to earn a living in the frontier lands fighting against the Muslim inhabitants of various cities and fortresses.  In the climax of Canto One, after having riled Christians and Muslims alike on account of his prowess in waging war on their homes and protectorates, the exiled Cid fights and defeats the forces of Ramon Berenguer of Barcelona but then releases the Count after depriving him of a vast sum of money and other treasures.  Two other cantos, the main subjects of future posts, follow. 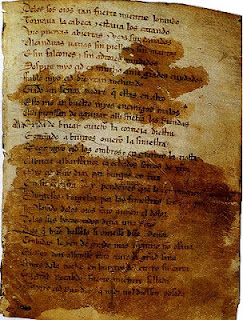 For a quick look at how the poem reads in translation, I'd like to backtrack to the very beginning of the work and the matching translation of the Spanish above.  Here's how Raffel renders the moving first tirada or laisse [epic stanza], a scene that begins in medias res because the first page of the sole surviving manuscript of the CMC is missing:

Tears were flowing from his eyes, then flowing faster
As he turned and looked back, just standing.
He saw the doors, swung open, padlocks gone,
Wall pegs empty, no furs, no gowns
Or cloaks, no falcons or molting hawks.
My Cid sighed, his burden weighing him down.
My Cid spoke, in measured, well-controlled tones:
"I thank you, my Father, my Lord on high!
This is the vulture trap my evil enemies sent me."
(The Song of the Cid, I, 1)﻿

Personally, I think that this is an excellent example of how readable Raffel's translation is throughout Canto One.  While substituting free verse for the assonant rhyme of the Spanish original, his English is compact, direct, and expressive--a big improvement over the other, often-wooden translations of the poem I've seen.  At the same time, one of Raffel's choices in the concluding line of this opening is a pointed reminder of just how much translations are, for better or worse, an unending tug of war between the original author and the translator: "vulture trap," while playing so well off the previous lines about the Cid's birds of prey, is a poetic add-on by Raffel that isn't present in the original, which only mentions a vague "esto" [this, something, i.e. implied treachery] as the source of the Cid's travails.  Should emendations like this be something to be concerned about translation-wise?  At this point, I'd say probably not. In any event, more on the cantar and its translation within the next week.  (Penguin Classics)﻿
Publicadas por Richard a la/s 21:27