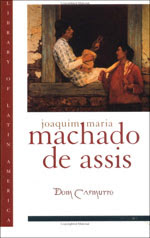 "I turned to face her; Capitu had her eyes on the ground. She soon lifted them, slowly, and we stood there looking at one another... Childhood confession, I could give two or three pages over to you, but I must be economical. The truth is, we said nothing; the wall said it all for us. We did not move, but our hands stretched out little by little, all four of them, taking hold of each other, clasping each other, melting into one another. I didn't take down the exact time of the gesture. I should have done so; I regret not having a note written that same night, which I could reproduce here with all its spelling mistakes: though it would have none, such was the difference between the scholar and the adolescent. I knew all the rules of orthography, but had no suspicion of the rules of love; I had gone through orgies of Latin and was a virgin with women.

We did not unclasp our hands, nor did they drop of their own accord, out of weariness or inattention. Our eyes stared into one another, then looked away, strayed for a while, then came back to each other again... A future priest, I faced her as before an altar: one of her cheeks was the Epistle and the other the Gospel. Her mouth might have been the chalice, her lips the paten. All I needed was to say a new mass, according to a Latin that no one learns at school, and is the catholic language of mankind. Don't think me sacrilegious, devout lady reader; the purity of the intention cleanses anything unorthodox in the style. We stood there with heaven within us. Our hands, their nerve ends touching, made two creatures one: a single, seraphic being. Our eyes went on saying infinite things, and the words did not even try to pass our lips: they went back to the heart as silently as they had come..." (Machado de Assis, 28-29)

While Brazilian culture's never had the death-grip on my imagination that fiction and films from France, Italy, and the Spanish-speaking world have lorded over me for years, Dom Casmurro went a long ways toward changing that during the brief amount of time I was lost in its pages. A worthy rival to Lampedusa's The Leopard for the best fictional non-fiction I've come across this year, this slyly chatty novel poses as the giddy first-person account of Rio de Janeiro native Bento Santiago's 1857 schoolboy romance with his beautiful neighbor Capitu Pádua, told some forty years after the fact when one lover's jealousy and a series of unkind surprises from life for both have taken their inevitable toll on the couple's first moments of teenage happiness.

Bento's no 19th-century pícaro to be sure, but he's just as disarming and witty a narrator as our old friend Lazarillo de Tormes. Always fussing over the sequence of events in his manuscript and worrying about how the reader will react to his telling of the story of the first love of his heart, he cuts a very charming, convincing and credible figure as a memoirist even as doubts begin to surface about the reliability of his judgement and memory. In addition, he's surrounded by a well-drawn cast of characters prone to making grand statements about life being like an opera ("God is the poet, the music is by Satan, [and the] special theater, this planet" [18-19])--not bad for a consciously "literary" romance set in a land wracked by fever epidemics, floods, leprosy and slavery, no? A great read. 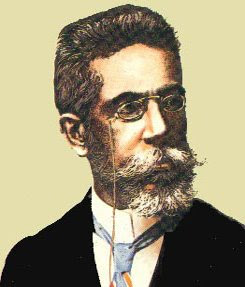