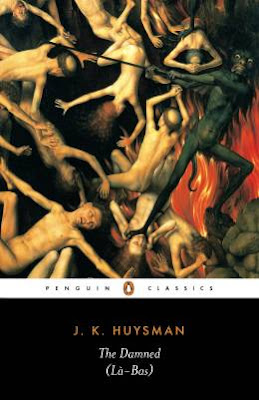 "Whatever you say about Charles VII pales into insignificance when you see Foucquet's portrait of him in the Louvre. I have often paused in front of that bestial face, a face in which I can clearly distinguish the snout of a pig, the eyes of the provincial money-lender and the sanctimonious, bloated lips of a prelate. The figure in Foucquet's painting resembles a debauched priest with a bad cold sunk in wine-induced self-pity! Skim off the fat and reheat the dish through and you can also see the same personality type--less salacious perhaps, more prudent in his cruelty, more obstinate and cunning--as his son and successor, King Louis XI. Nonetheless, this was the man who had Jean Sans Peur assassinated and who abandoned Jeanne d'Arc. I rest my case." (Huysmans, 38-39)

I think I first read parts of this deliciously juicy, odd, and truly cynical narrative fifteen to twenty years ago in one of my earliest encounters with the French proto-surrealist canon, but the Orbis Terrarum Challenge provided me with the perfect pretext to revisit its late-19th century world. While the work begins with an attack on the modern novel's naturalism-obsessed aesthetics that's halfway between a debate and a lecture, it quickly evolves into a scornful condemnation of the modern age itself--so pleased with itself for advances in medical science and inventions like electricity and yet further and further removed from the religious ecstasies and theological certainties of the Middle Ages. As if to accentuate this generational chasm, Huysmans wickedly introduces an age-old metafictional ploy, the presentation of a book within a book, in the form of a biography that's being written by the protagonist Durtal about a real-life 15th century soldier and mystic. His subject? None other than the infamous child murderer and heretic and one-time Joan of Arc loyalist Gilles de Rais, research into whom leads our fictional biographer into a shadow world of 19th-century fin-de-siècle Parisians engaging in Satanism, spiritualism, and other such occult practices in their own quest for some sort of spiritual meaning in the here and now. If this sounds like unduly heavy reading, not to worry. Huysmans' prose is full of an adjectival fury that's frequently hysterical to behold, and his characters, prone to constant diatribes against this, that and the other target du jour of their pre-blogging day and age, are rarely dull. However, this might not be the ideal book for you if you're offended by the notion of a sex scene taking place on a mattress strewn with communion wafers or bothered by the people of southern France being described as a race of "dull-eyed, olive-skinned chocolate munchers and garlic crushers" (41). In other words, a controversial classic!